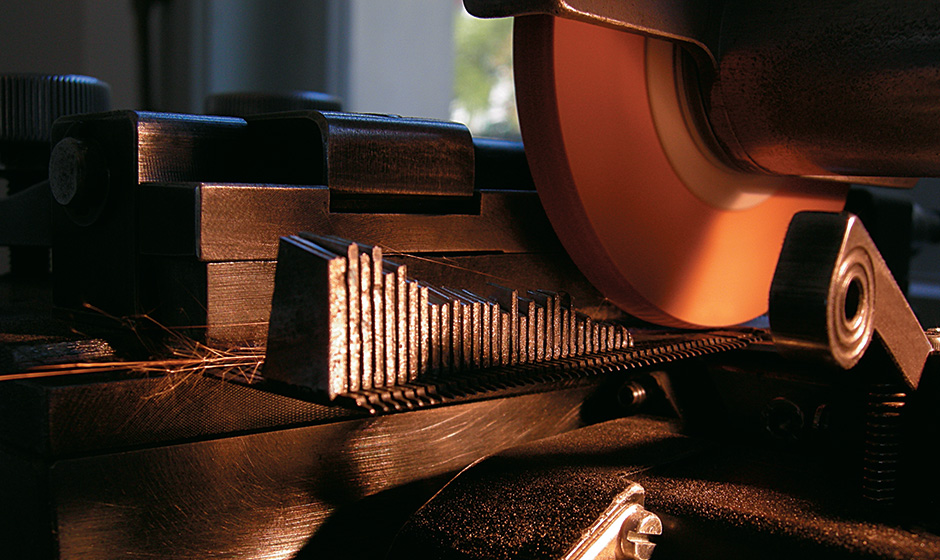 Once upon a time a small Swiss village, named Sainte-Croix, became famous for being the lost town  of the music box industry. It all started in 1865, when Charles Reuge, created the first musical pocket watch. Twenty years later, his son, Albert, decided to open a music box workshop converting the family workshop into a small factory producing music pieces. Early on, everything was related to music with the Reuge.

Reuge musical mouvement was even used and put in random objects such as powder compacts or lighters.

Guido Reuge, the son of the son, guided for over 60 years the Reuge dynasty dedicated to mechanical music developing the most incredible music boxes of all times.

In 1930, he was described and respected for not only being intuitive and inovative, but also for being the pioneer of the mechanical musical industry as he was the first music factory to acquire a few competitors companies, bringing a real added-value to Reuge.

In 1960, Reuge launched the singing birds and had a strong will to develop an extensive variety of melodies in order to pass beyond competitors who had a bigger place on the market. It was then a necessity, and Guido well understood it.

Thanks to his vision, energy and artistry he resorted credidibility to the vocation of music makers.

Not only Reuge is nowadays "a" if not "the" true master of mechanical music but the Swiss company is probably one of the last survivors. In an era where ipods, ipads, iphone reign- allowing you to keep a few thousands of "melodies" not to say songs... Reuge still manages to surprise the digital industry with his mechanical one!

For the little anecdote - During World War II, U.S. Soldiers returning home with a music box in their bag was a symbol of victory and of a new life to begin!

Back in 2013, MusicMachine 1 opened the floodgate for MB&F to collaborate with external creators on projects outside the scope of the wristwatch; it initiated a new category – “Co-creations” – that invited MB&F to a world beyond that of miniaturized horology. And it did not tell the time: rather, it was a music box created with REUGE that uprooted everything we thought we knew about music boxes, from the design all the way to the music. MusicMachine 1 featured all the traditional, time-honoured elements of a superlative high-end music box, but configured in MB&F’s individualistic manner. It was a music box for today.

REUGE was founded in 1865 in Sainte-Croix, Switzerland and is today the premier manufacturer of music automatons on the planet with more than 155 years of expertise and experience. Between 2013 and 2015, MB&F and REUGE released three MusicMachines, each playing different songs – untraditionally, modern music – and each model was a success. Maximilian Büsser and his Friends decided it was time to redesign the first MusicMachine and issue another edition. 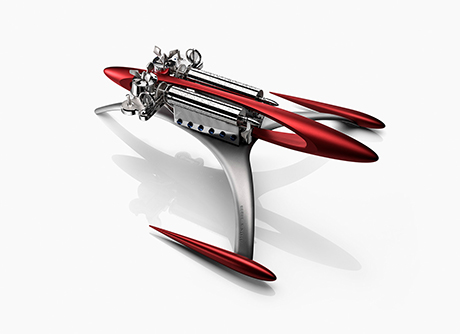 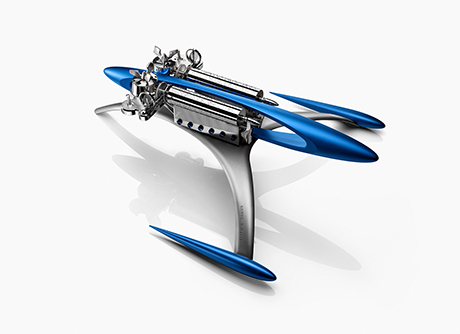 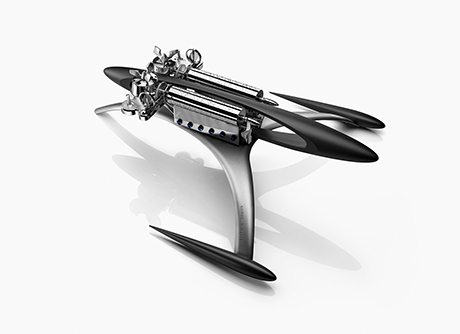 MB&F celebrates its tenth anniversary in 2015 with the tagline “A creative adult is a child who survived.”

One film that children (and many adults) of all ages love is Star Wars and who could forget the frantic swarms of the Imperial fleet's TIE fighters as they battle the Alliance. The TIE fighter-inspired MusicMachine 3 (MM3) is proof positive that both the child and the Force are still going strong within MB&F founder Maximilian Büsser.

MusicMachine 3’s design with those lattice-like vertical wings support and protect the dual music cylinders, each playing three melodies: the theme tunes from Star Wars, Mission Impossible, and James Bond on the right and The Godfather, Merry Christmas Mr. Lawrence, and The Persuaders on the left. The music is powered by two independent movements mounted on the two tail sections. Each movement has its own winding key (disguised as thrusters), a mainspring barrel, horizontal cylinder with pins, and comb with hand-tuned teeth sounding each note. An air regulator in the form of a circular fan (resembling a rotating radar dish) governs the unwinding speed/music tempo of each cylinder. The side wings also play a vital role in propagating sound vibrations down from the combs to the naturally amplifying resonant base, manufactured by JMC Lutherie.

MM3 may appear to come from a galaxy far away in the future; however, its origins are much older and much closer to home. MusicMachine 3 features all of the traditional elements of a beautifully arranged, high-end mechanical music box. This should come as no surprise as it was developed and crafted according to MB&F's design by Reuge, the Swiss music box manufacturer with 150 years of expertise and experience. 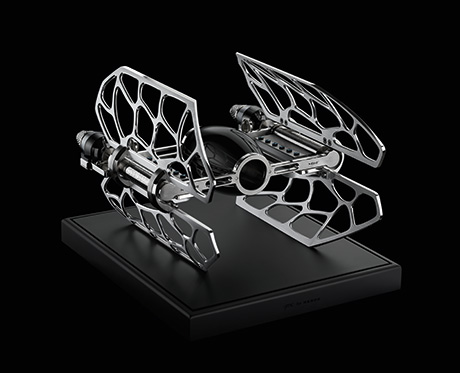 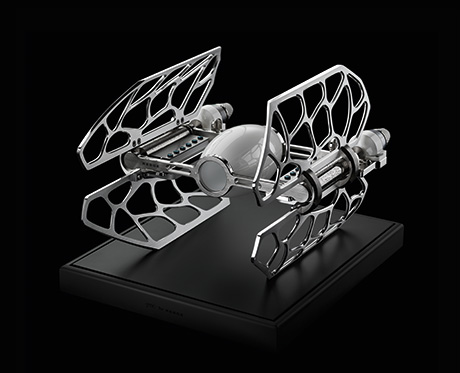 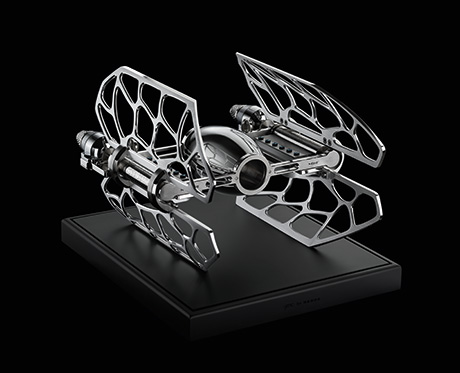 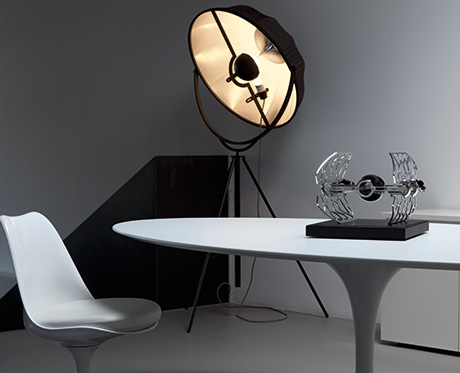 With its spaceship-like design, rock and sci-fi melodies and innovative resonance soundboard, MusicMachine 2 (MM2) boldly goes where no music box has gone before.

Underneath its futuristic guise, MM2 features all the traditional elements of a beautifully-crafted, high-end music box made by REUGE, the music box manufacturer with nearly 150 years of expertise and experience.

MusicMachine 2 is powered by two independent movements mounted on the starship’s tail section. Each cylinder plays three melodies: themes from Star Wars, The Empire Strikes Back and Star Trek, on one 'channel'; Led Zeppelin’s Stairway to Heaven, The Rolling Stones’ Angie and The Clash’s Should I Stay or Should I Go? on the other. Small wonder: MM2 was conceived and designed by MB&F and its songs have been selected by their rock ‘n’ roll founder and sci-fi fan, Maximilian Büsser.

One of the biggest challenges of MusicMachine 2 was in amplifying the sound. An ingenious solution was raised and developed by Jeanmichel Capt of JMC Lutherie, who created a bespoke soundboard featuring NomexTM – a type of honeycomb-structured Kevlar – sandwiched between two resonant 350-year-old spruce membranes.

Only one in 10,000 spruce trees has the exceptional acoustic properties required. Selected trees are cut down in November when sap flow is minimal and the timber is then dried for five to ten years. The result is a clear, loud, pure sound, supremely rich in timbre.

Following on from the first MusicMachine, launched in 2013 and featuring a streamlined space shuttle design, MM2 is the second instalment in what will be a memorable trilogy of MusicMachines.

MusicMachine 2 is a limited edition of 33 pieces in white and 66 pieces in black. 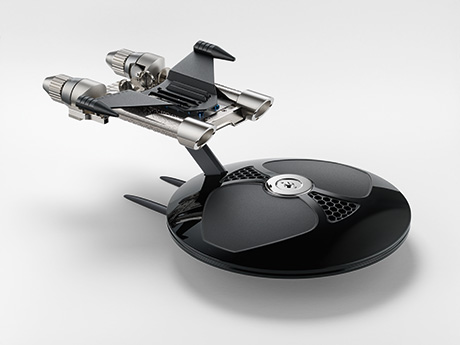 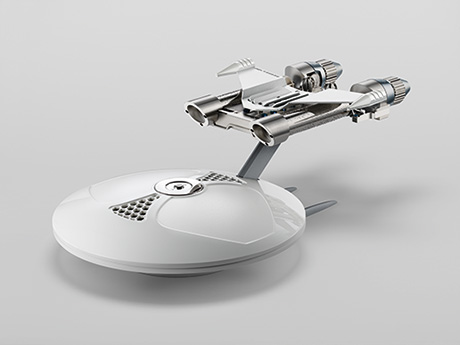 With its dual propellers and twin silver cylinders mounted on sleek outrigger landing gear, MusicMachine looks like a spaceship hailing from a galaxy far, far away.

But take a closer look and you can see – and hear – that MusicMachine is actually a high-end music box featuring all the traditional, hand-crafted elements… however, their design and configuration is anything but conventional.

And no wonder: MusicMachine is the otherworldly brainchild of MB&F, brought into earthly existence by REUGE, the premier manufacturer of music boxes this side of the Solar System.

MusicMachine’s twin cylinders each play three melodies chosen by MB&F founder Maximilian Büsser. On the left, there is a sci-fi vibe going on with themes from ‘Star Wars’, ‘The Empire Strikes Back’ and ‘Star Trek’. On the right cylinder, MB&F's radical, nonconformist attitude comes to the fore with Pink Floyd’s ‘Another Brick in the Wall’, Deep Purple’s ‘Smoke on the Water’ and ’John Lennon’s ‘Imagine’.

For a start, they created two independent movements configured as mirror images of one another, meaning the component design and architecture had to be completely inverted.
REUGE also configured MusicMachine’s two 72-note combs vertically, instead of horizontally, to look like air vent grills on either side of the vessel’s main body. These combs are plucked by pins on the horizontal cylinders powered by twin mainspring barrels resembling pistons under the winding propellers. Outside of these propellers are the circular-fan shaped air regulators controlling the speed at which the cylinder revolves.

MusicMachine is in a limited edition of 33 pieces in white and, for those tempted by 'the dark side', 33 pieces in black. It’s awesome to look at, beautiful to listen to – the Force is strong with this one. 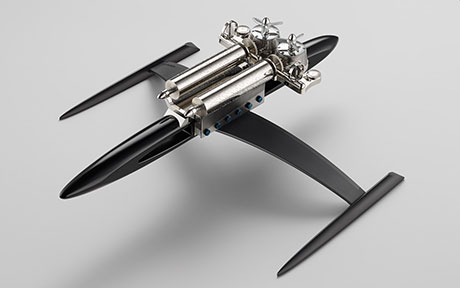 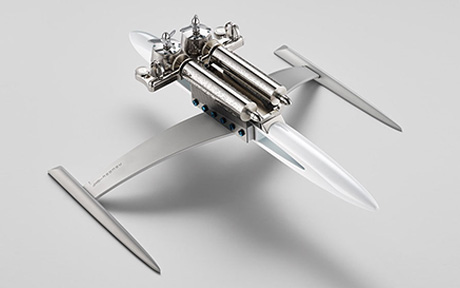