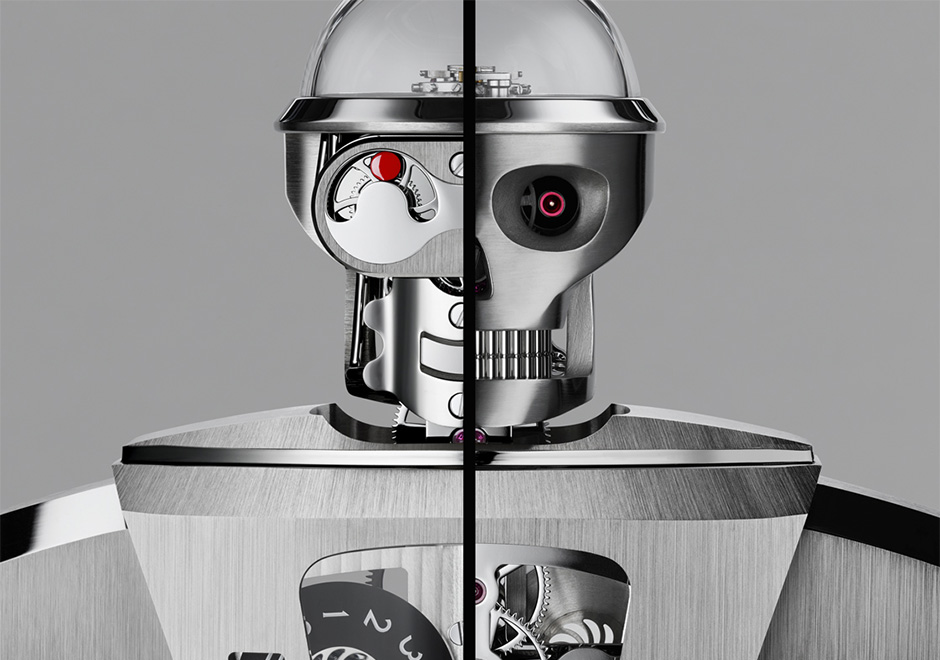 For 175 years, L'Epée has been at the forefront of watch and clock making. Today, it is the only specialised manufacture in Switzerland dedicated to making high-end clocks. L'Epée was founded in 1839, initially to make music box and watch components, by Auguste L’Epée who set up the business near Besançon, France. The L’Epée hallmark was that all parts were made entirely by hand.

From 1850 onwards, the manufacture became a leading light in the production of ‘platform’ escapements, creating regulators especially for alarm clocks, table clocks and musical watches. By 1877, it was making 24,000 platform escapements annually. The manufacture became a well-known specialist owning a large number of patents on special escapements such as anti-knocking, auto-starting and constant-force escapements and the chief supplier of escapements to several celebrated watchmakers of the day. L'Epée has won a number of gold awards at International Exhibitions.

During the 20th century, L'Epée owed much of its reputation to its superlative carriage clocks and, for many, L'Epée was the clock of the influential and powerful; it was also the gift of choice by French government officials to elite guests. In 1976 when the Concorde supersonic aircraft entered commercial service, L'Epée wall clocks were chosen to furnish the cabins, providing passengers with visual feedback of the time. In 1994, L'Epée showed its thirst for a challenge when it built the world's biggest clock with compensated pendulum, the Giant Regulator. At 2.2m high, it weighs 1.2 tons – the mechanical movement alone weighs 120kg – and required 2,800 man-hours of work.

Co-created by MB&F and L’Epée 1839, Grant is a robot with a time display on his shield – and a mission to slow things down, when time runs too fast.

While Grant’s time moves relatively slowly, he can travel quickly over rough terrain (or the messiest desk) on his three operational rubber tracks. Grant can also transform into one of three different modes: lying horizontally over his chassis for a low profile; crouching at 45 degrees; and sitting up 90 degrees. Grant’s time shield can always be set to a comfortable and optimal viewing angle. Whatever the angle, Grant’s highly polished clockwork is on full display, and you can follow every click and turn of the gears. The isochronal oscillations of the regulator keeping time in Grant’s glass-domed ‘brain’ are evidence of the clockwork’s high precision. 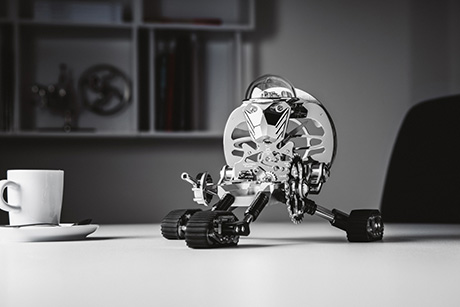 Conceived by MB&F and built by L’Epée 1839, Octopod stands or crouches thanks to its eight articulated legs. However, the real horological magic and mystery take place in Octopod's completely transparent spherical 'head'. 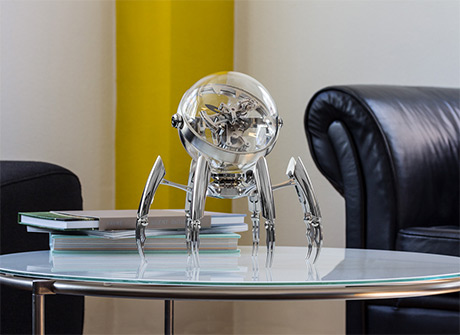 The first thing to notice is that Octopod's transparent sphere is gimballed in a similar way to how traditional ship chronometers were gimballed although on one axis rather than two.

The second thing is the pulsating escapement, which regulates the clock's precision, located on its minute hand rather than the more usual position attached to stationary movement plates.

And thirdly, there's the mystery of how Octopod's clockwork is suspended inside its crystalline sphere, so that it appears to be floating in space or water. Like an octopus concealing parts of itself with camouflage, Octopod conceals parts of itself with visual tricks of its own.

Octopod is available in 3 limited editions of 50 pieces each in black PVD, blue PVD, and palladium (silver).

Conceived by MB&F and built by L’Epée 1839, Destination Moon is the quintessential torpedo-shaped rocket of childhood dreams. But look more closely and you will see that its minimalistic form is evocative rather than definitive. 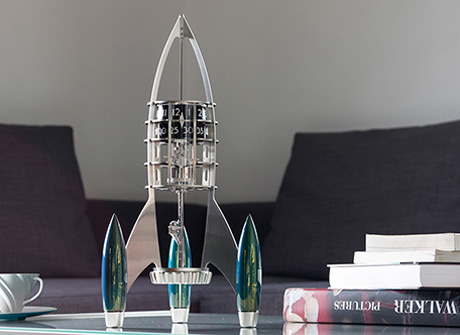 Hours and minutes are displayed on large diameter stainless steel discs with stamped numerals. While the legibility of the time display is not in question, focusing on the time rather than the spectacular, vertically-structured, open movement is likely to require deep concentration.

And then there's Neil: a smile-inducing, space-suited figurine forged in solid silver and stainless steel, magnetically attached to the ladder connecting the crown to the movement. Neil is the astronaut flying Destination Moon to exotic worlds, but more importantly, Neil imparts a childlike sense of wonder by putting man into the machine.

Destination Moon is available in 4 limited editions of 50 pieces each in black, green, and blue PVD, plus palladium (silver).

“Balthazar by L’Epée 1839 for MB&F is a sophisticated and imposing high-precision robot clock composed of 618 beautifully finished, micro-engineered components.

But beware... Balthazar hides two sides, as there are in all of us.

Boasting a month-busting 35 days of power reserve, Balthazar’s clockwork displays “slow” jumping hours and trailing minutes via two discs on the chest, while the power reserve indicator is located on his belly. His red eyes, which continually scan the surroundings, are actually 20-second retrograde displays. 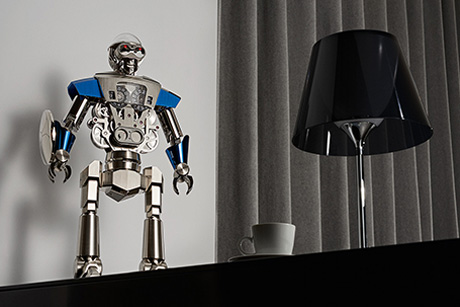 Rotate his torso 180 degrees and the absolute nature of Balthazar’s darkness is revealed by the cold hard skull with menacing teeth and deep-set ruby-red eyes. But it’s not all threat here as Balthazar’s chest also contains a dual hemisphere moon phase that should help you anticipate the evolutions of your mood.

Moving higher still to Balthazar’s “brain” under the polished glass dome, we find the precision regulator of the clockwork. Finally Balthazar does more than display horological events: as well as rotating around the hips, his arms articulate at both the shoulders and the elbows, and his hands can clasp and hold objects.

Balthazar is available in limited editions of 50 pieces per colour in black, silver, blue or green armour.

Sherman’s a cute little robot, but to be frank, he doesn't do very much.

In fact, Sherman really only does two things, but he does both extremely well.

Sherman tells the time. And Sherman makes people smile, which is probably the world's most useful and (emotionally) valuable complication. That's a superpower!

Conceived and developed by MB&F and engineered and crafted by L’Epée 1839 – Switzerland's only specialised high-end clock manufacture – Sherman is the result of Maximilian Büsser’s on-going quest to revisit his childhood, during which he hankered for a robot friend.

Sherman's mechanics are based on a L'Epée 1839 in-line eight-day movement, which ensures that the friendly tank-treaded table clock can display the correct time on his chest for more than a week before requiring rewinding.

Sherman’s mainspring barrel bridge extends down to support his tracks, movement spacers act as shoulders for the arms, and his eyes are bolt heads supporting the regulator. The movement plates and bridges of the clock also make up the skeleton and body of the robot. The transparent dome on Sherman's head reveals his mechanical brain, which is actually the regulator controlling the precision of the robot's time. Sherman's arms can be manipulated into nearly any configuration, and his hands can be used to hold items. And while Sherman doesn't walk, his rubber caterpillar tracks are fully functional and, with a little help from a friend, he can roll over the rugged terrain of a typical office desk.

But as cool as Sherman's robotic and horological accomplishments are, they pale in comparison with his emotional superpower of spreading happiness wherever he goes. 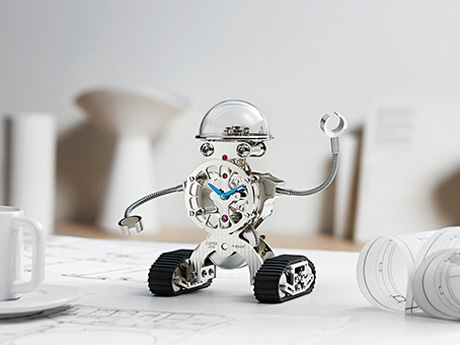 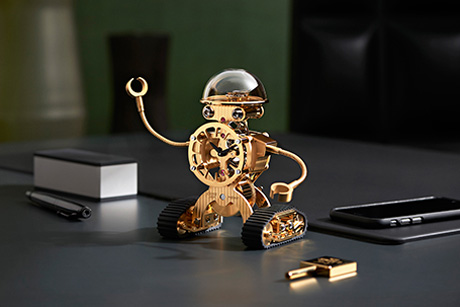 Sherman is launched in limited editions of:

Hours and minutes are indicated on the central black dome by hand-polished hands that follow the dome’s curved contours. Behind that, a smaller rotating dome, accompanied by a revolving radar dish, provides an intuitive view of remaining energy: five bars indicates the movement is fully wound (40 days of power); one bar means Starfleet Machine is running low on propellant (eight days of remaining power).

Below 12 o’clock on the central hour-minute dome are the double retrograde seconds in the form of turret-mounted laser cannons. The cannons start in parallel and cross over one another before rapidly flying out again, an action marking off 20-second intervals. The red-tipped cannons provide eye-catching visual animation and the regulator has deliberately been placed in full view for all to admire.

One of the biggest challenges for L’Epée 1839 was respecting the movement configuration required by MB&F’s spacecraft design. L’Epée’s calibre – featuring five main spring barrels usually equips vertically standing clocks, but here it is laid flat. The escapement platform also had to be set horizontally to be protected by the turret-mounted laser cannons. Naturally, the movement beats with a precision that Starfleet would be proud of, an impressive accuracy of -2 to +2 minutes over 40 days! 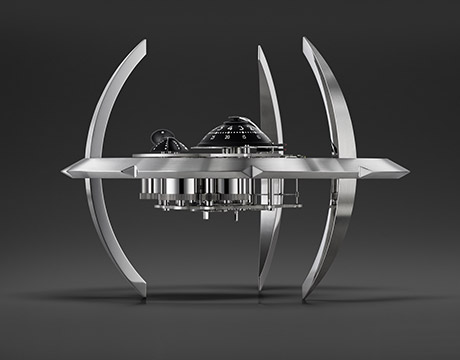 Starfleet Machine is limited to 175 pieces in ‘light’ or ‘dark’ editions. 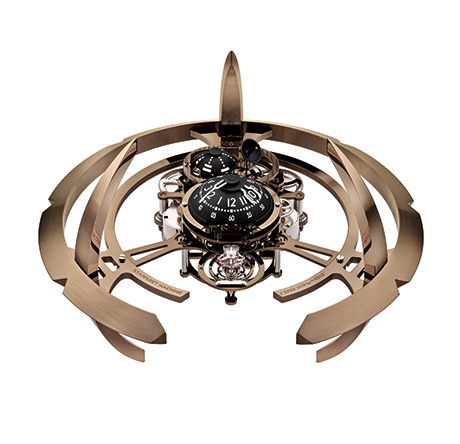 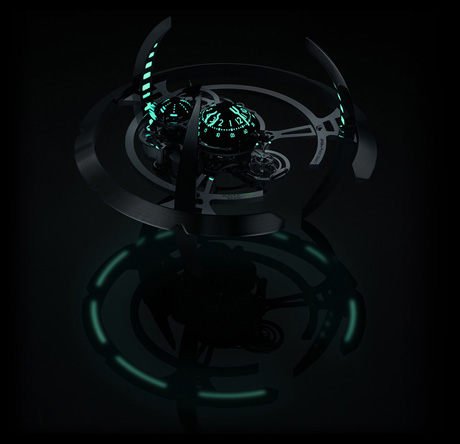 Arachnophobia by L’Epée 1839 for MB&F, is as extreme as they come, but the eye-catching three-dimensional sculpture is also an impeccably finished table (and wall) clock that tells the time using two hands supported by eight legs. 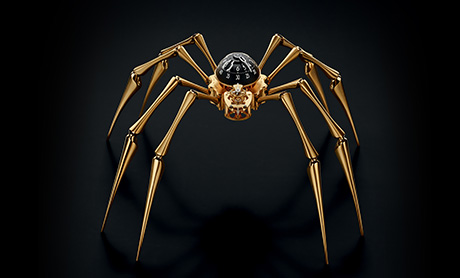 Arachnophobia was inspired by a giant monumental spider sculpture called Maman created by Louise Bougeois (1911 - 2010), which has been installed around the world.

The body is outfitted with a black dome with white numerals depicting the hours and minutes. The head houses the regulator with its oscillating balance wheel (and a set of jaws in case it gets peckish at night), while the other end contains the mainspring barrel, which powers the movement.

The eight legs are connected to the clock "body" by ball-and-socket joints. By rotating them the legs can be made to go flat, turning them around again allows them to stand up high like the Bourgeois sculpture that inspired them. The front legs can also be made to go flat while the six others maintain the standing position (warning: this position looks a little menacing).

While Arachnophobia is not nearly as large as the sculpture that inspired it – which from a distance does not look dissimilar to something that could have come from War of the Worlds – at 405 mm in diameter with the legs fully extended, or hanging on a wall, it is certainly large enough to make a real impression. Though whether that impression is positive or negative depends on how much you enjoy creepy-crawlies.

Arachnophobia is available in black or 18k gold-plated editions.