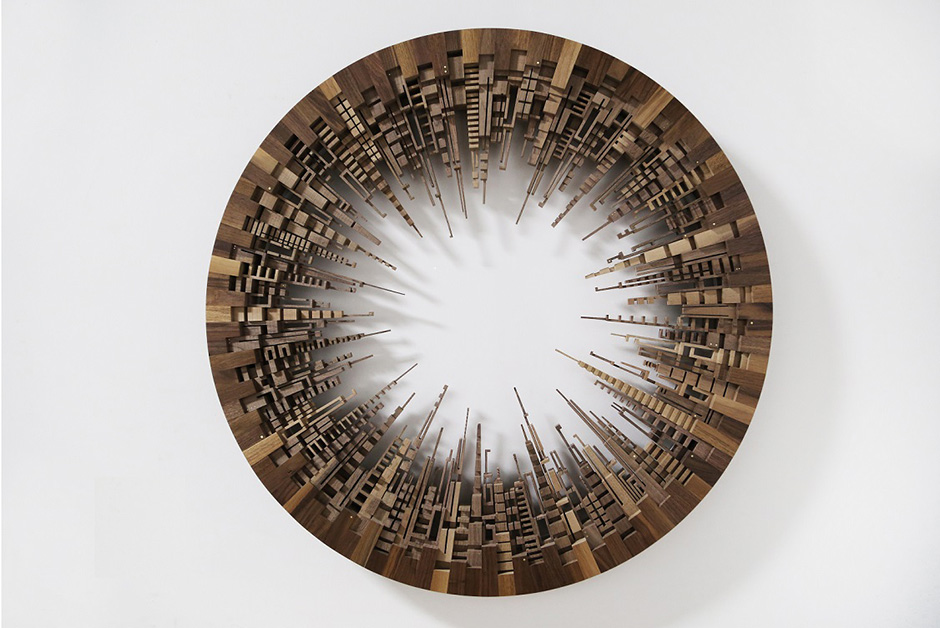 The M.A.D.Gallery is thrilled to present URBIS, a collection of six abstract cityscape sculptures by James that are downright cool. Looking from the outside in, it is easy to get lost in the details of these fantasy cities and contrive imaginative stories of a futuristic life along the streets of each vertical urban environment.

At the young age of 16, James McNabb found his creative niche during a high-school woodworking class, which guided his path to becoming an artist. In 2008 James graduated from Rochester Institute of Technology’s School for American Crafts, where he learned the fundamentals of woodworking and furniture design. It was during these years he developed a passion for the craft. Simultaneously, James became fascinated by nature, trees, and wood as a material for making objects. Over time his objects began to evolve, becoming less utilitarian and more expressive – he found himself crossing over to the land of an artist. In 2012, he went on to earn a master’s degree from Indiana University of Pennsylvania where he developed his signature body of work called “The City Series,” a collection of wood sculptures that explore the limitless possibilities of the urban landscape and our relationship to it.

Today James McNabb is best known for his one- of-a-kind skyline-inspired wood sculptures. His work combines traditional woodworking with experimental art to create new visions of the urban landscape.

Based in Philadelphia, his studio is adaptive to his needs and filled with both finished pieces and projects in the works. “I can see my new ideas come to life with old ideas in the background, and together they can inspire future ideas,” shares James. “It’s always a dynamic space, often moving and rearranging to make more room for a new project.”

Making art is an extremely effective method for coping with the ups and downs of life for James, and it brings him a sense of peace. Art has affected his life in both positive and negative ways. “When life is moving in chaotic ways, I revert back to my place of peace. It gives me a sense of purpose when I’m feeling lost,” he says.

The URBIS collection reveals intricate architectural structures imagined by James, from towering skyscrapers and office buildings to high-rise apartment buildings. Behind these intricate cityscapes is a tremendous amount of time and talent. Each towering wooden skyscraper is skilfully carved out with a bandsaw and then carefully assembled piece by piece to create impressive urban landscapes.

In the City Square sculpture, James visually transforms a skyline into an urban block by inverting each tower in such a manner that the antennas are practically touching in the centre while the outer edges are squared off. The composition compromises 102 unique structures in American Black Walnut, each laboriously sanded and varnished to an exquisite finish to complete the look. This contemporary piece measures 66 x 66 x 6 cm. 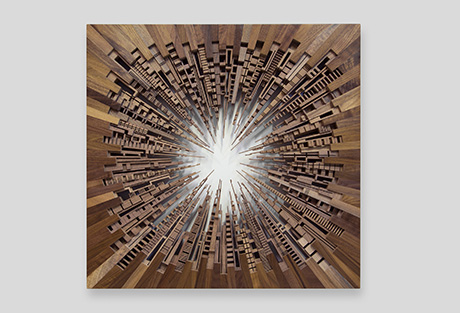 ACK CTY WHL is a work of art that bends a modern metropolis into a sophisticated sphere due to the precise placement of each elongated wooden tower. The gentle rondure and simplicity of the perimeter contrast with more than one hundred highly ornate superstructures arranged inside. One can visualize the bustling momentum of city life happening within this circular world. The negative space creates a glowing sun that adds to the complexity and depth of this architectural wonder. This eye-catching work of 91 cm in diameter incorporates a variety of wood types, including cherry, oak, mahogany and maple. 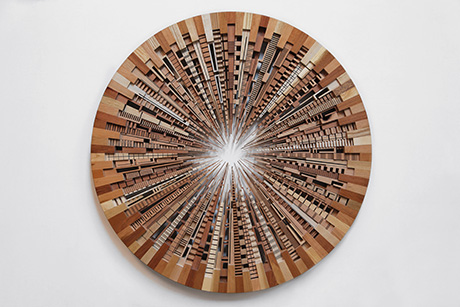 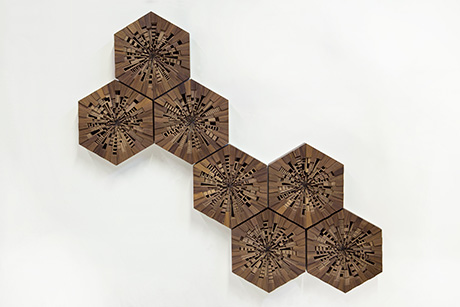 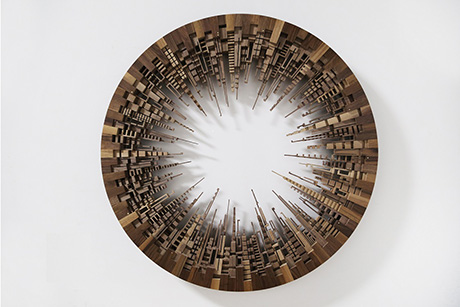 In a similar design, URB CTY WHL maintains the round construction of ACK CTY WHL though the interior is modern with clean structures crafted from American Black Walnut. The streamlined design of this rolling metropolis eases thoughts and draws on a simpler way of life. 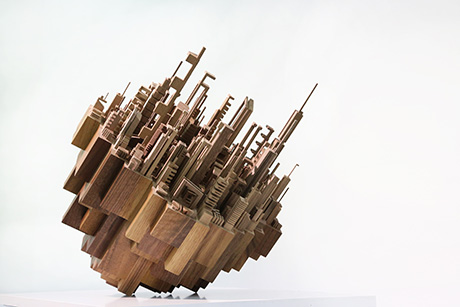 Disposition is a sculpture balancing a bustling city filled with distinctive architecture at varied elevations. The sleek skyscrapers are composed in American Black Walnut and assembled to create a 46 x 46 x 51 cm modern metropolis. One has a bird’s-eye view into the streets of this city on the edge, and it’s easy to imagine an uphill climb or sliding down – or perhaps just hanging on. 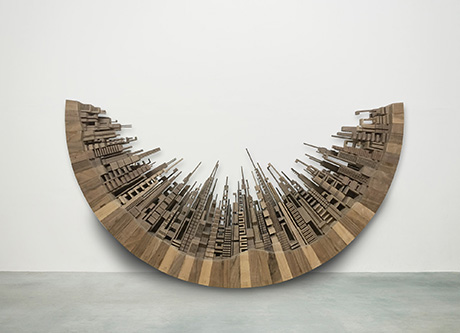 Each unique piece is signed by James McNabb and comes with an accompanying quality certificate.

Working similarly to the fast pace of city life, when an idea strikes, the creative process begins and James hits the road running. The initial notion is realized in a quick sketch followed by a more detailed drawing that is then digitized. If the concept passes the necessary tests, a production plan is developed and a stack of locally sourced raw lumber quickly arrives at the Pennsylvania- based workshop. And construction begins.

Hours upon hours are logged to process the material with steps that include milling and dimensioning. Applying his unique skillset, James builds out the joinery for the structure and personally overviews each step in the assembly. 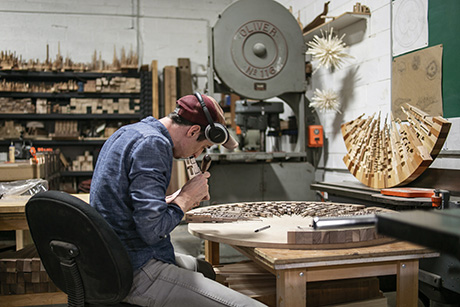 The primary tool used to create his works of art is the bandsaw. This piece of machinery provides the ability to manipulate wood and make a variety of cuts and mark makings. “To me, it’s a very expressive machine, responsive to its user in a very sensitive way,” explains James. “I’m sensitive to how the material behaves with the machine, and how my behaviour impacts the resulting forms. If we (maker, material, machine) can dance together, the results are often beautiful.” 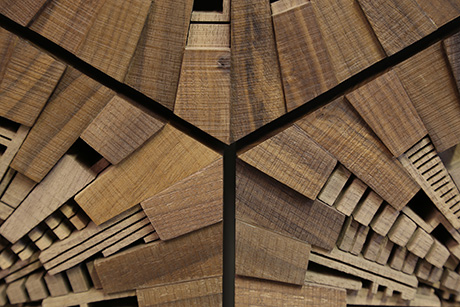 James designs each tower in his mind’s eye and uses his hands to freely guide the lumber, cutting out every detail of the structure with the bandsaw. “I like to spend most of my time cutting the wood pieces on the bandsaw. It requires patience and focus as each piece is cut one at a time by me,” he explains. Once all the architectural structures are finished, James assembles each individual component, piece by piece. The entire sculpture is then sanded to an impeccably smooth texture and finished with varnish to enhance the wood grain.

Due to the large number of individual components transformed from raw lumber to finished pieces, these works of art require about 10-12 weeks to complete. 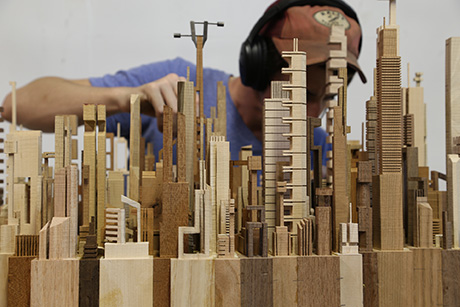 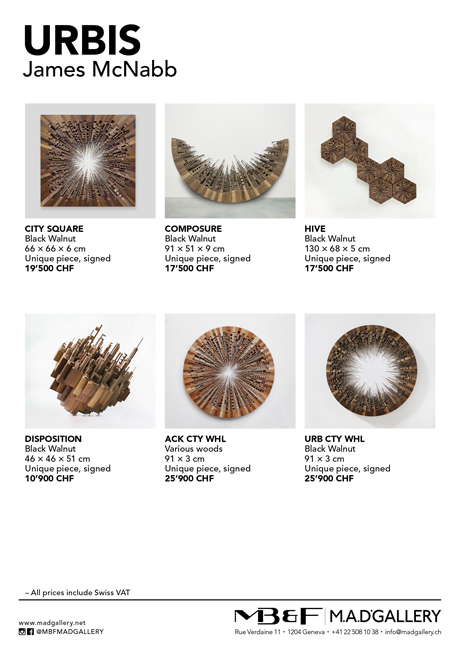