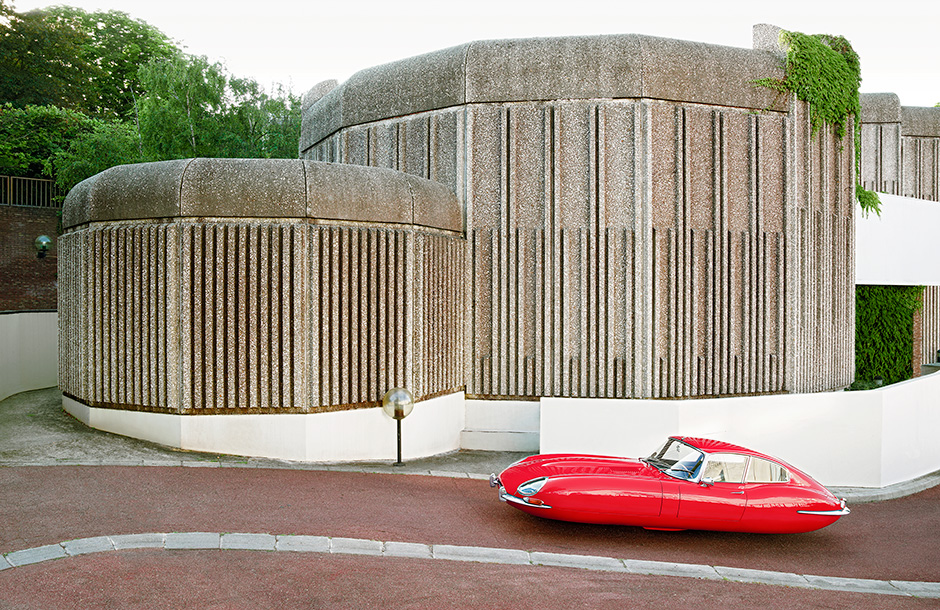 Currently living and working in Paris, Renaud Marion is a 39-year-old photographer, born in the French Alps.

He began his love of art as a graffiti artist, but graffiti can be fleeting. To lend permanence to his spray-painted works, Marion decided to photograph them; these pictures he could keep forever.

The artist continued photographing street art, even after moving to London. While there, he broadened his list of subjects to include people and architecture. Upon his return to France, Marion decided to fine-tune his photographic competencies at Parisian photography school EFET.

Taking on work as an assistant, the Frenchman had the opportunity to shoot photos in the fashion, advertising and decoration industries before he learned enough to fly solo. “Little by little I became a photographer,” he says.

Marion’s artistic inspiration derives from not only his childhood and sci-fi but also quirky filmmakers like Terrence Malick and Wes Anderson, and photographers such as Alec Soth and Nadav Kander.

His incredible photography has been featured in several design and travel magazines and his collaborations also extend to communication agencies and architectural firms.

The artist would like to drive a flying car before he dies, while the child in him hopes that the technology from science fiction stories will one day become reality.

The M.A.D.Gallery is pleased to showcase nine visionary images of ‘flying’ cars from the series Air Drive by French photographer Renaud Marion.

Taking cues from his childhood imaginings and inspired by science fiction films and artists, Marion depicts his vision of futuristic transportation of wheel-less cars serenely suspended above the ground. But he has included a neat twist: While the vehicles’ levitation most definitely smacks of sci-fi, the cars are in fact modified vintage classics, including Chevrolets, Mercedes, Jaguars, Aston Martins and Porsches.

The images that emerge are a throwback blend of retro style with futuristic imaginings. Iconic cars from the glory days of automobile production are transformed into airborne transport, catapulting their vintage design into a visionary age. The pictures are really quite surreal.

Growing up in the 1980s, Marion thought that by the year 2000 everyone would be piloting flying cars, like the landspeeder from Star Wars or the futuristic soaring machines from French artist, Moebius. Marion’s dream of one day propelling a floating vehicle has not yet become reality but in this series, the 39-year-old has brought to life the ‘hover’ vehicles of his childhood fantasies.

“our dreams of today are the reality of tomorrow”

“As a child, I imagined the new millennium with flying cars, spaceships, parallel worlds, extra-terrestrials living with us on earth and time travel,” says the photographer. “We would have all been dressed up in space outfits and equipped with laser pistols. These are the dreams of a normal child, I think… I hope.”

Motivated by the idea that “our dreams of today are the reality of tomorrow,” and his quest to create the flying cars of his boyhood imagination, Marion developed the unique concept for his Air Drive series.

At the end of 2012 in Geneva, the Frenchman shot the first automobile images that he would later manipulate into levitating machines.

Capturing the idea in his head of what constitutes a “flying car” and making it palpable required a two-step “manufacturing” process. The first step involved finding the subjects of the shoot and identifying the locations; the second involved the equipment.

“For the first part of the series photographed in Geneva, I chose the cars simply by walking down the street. I looked for cars parked on the side of the road as I wanted to use real size models instead of miniatures,” he says.

Marion chose to shoot classic automobiles because they most closely resembled his childhood idea of what a flying car should look like. The first vehicles he photographed included a Chevrolet El Camino, Mercedes 300 SL Roadster and Jaguar XK120.

Finding the appropriate environment in which to shoot the autos meant seeking out spaces devoid of people and recognizable buildings. The venerable cars take centre stage against backgrounds of mid-20th century architecture in varying textures and muted or neutral colours.

“I looked for architecture dating from the 1970s; for me that’s retro-futuristic. The buildings had to be imposing, massive and graphic.”

To achieve the look of “flying” cars, Marion had to apply a digital assembly technique to remove the tyres and wheel wells from the classic beauties and merge the cars onto different backgrounds, eventually settling on the right scene for each futuristic portrayal.

These photographic anachronisms garnered a lot of attention when the imaginative artist initially posted them online. Classic car lovers, science fiction fans and photo and art admirers were suddenly followers of Renaud Marion.

This newfound recognition allowed Marion access to car collectors, some of whom lent their prized possessions to the photographer for his Air Drive follow-up shoot in Paris. These included a Mercedes 300SL Paul O’Shea, Lincoln Continental, Jaguar Type E, Mercedes 190SL, Aston Martin DB5 and a Porsche 356.

Marion not only borrowed cars but cameras as well: Leica Camera loaned him their latest Leica S to capture stills of the vintage automobiles.

“What if it were true that in their time, Jules Verne or Leonardo da Vinci had unconsciously created universes to condition humans for an unpredictable future, one they could never imagine?” asks Marion. “It might be the same as today. Science fiction is everywhere. Is it here to prepare us to fly in spaceships, to meet people with powers or simply to drive flying cars?” 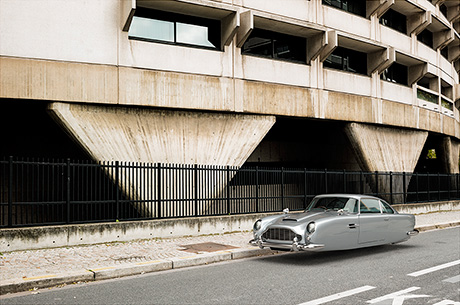 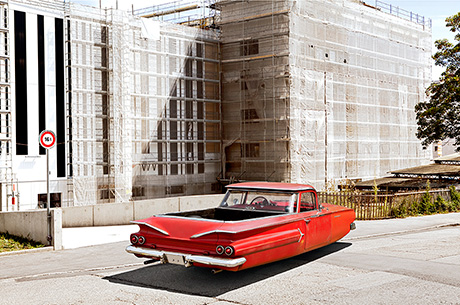 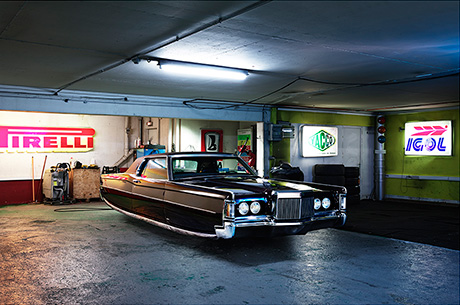 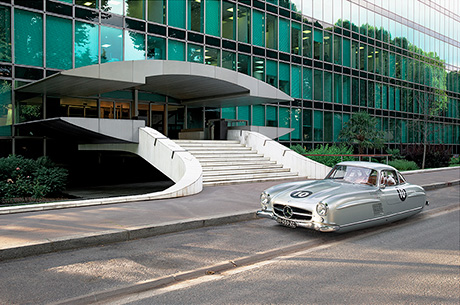 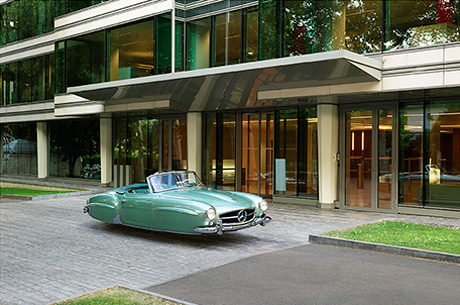 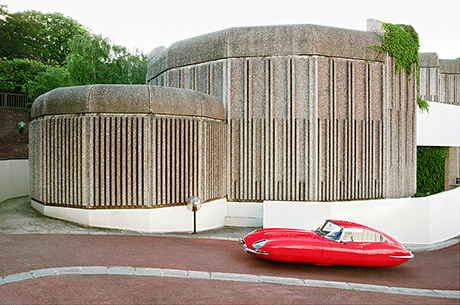 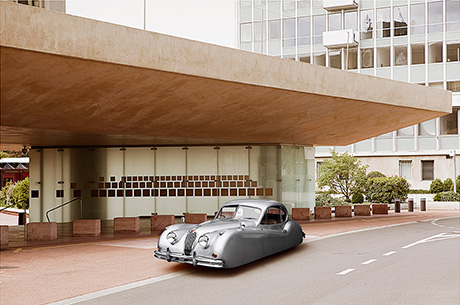 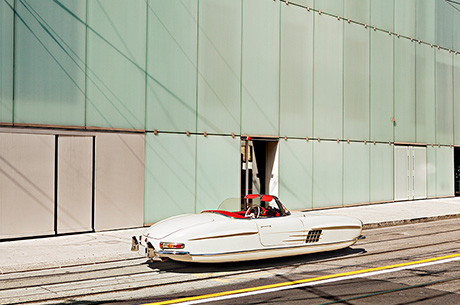 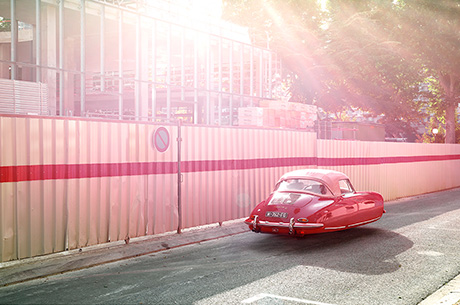