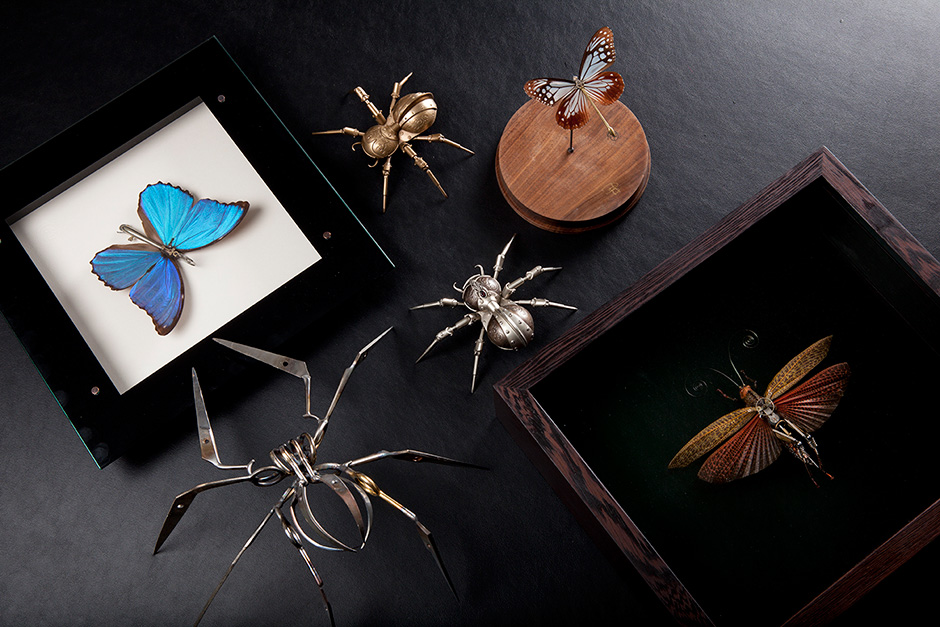 The MB&F M.A.D.Gallery is proud to present a collection of “Mechanical Entomology” featuring insect-inspired sculptures by four talented artists hailing from both sides of the Atlantic.

Spectacularly fusing the world of natural history with metal, mechanisms and machines, this collection – the first themed M.A.D.Gallery exhibition – includes the mechanical creatures a.k.a. “MeCre” of Gaby Wormann; the Duellona cast bronze insect sculptures of Christopher Conte; the ‘clockwork’ butterflies of Paul Swan Topen; and the Scissor Spiders of Christopher Locke. Each creation is the fruit of these artists’ fertile imaginations and their supreme artistic craftsmanship.

Entomology is the scientific study of insects, and we have all probably witnessed a few entomological collections, starting with school trips to musty museums lined with glass-topped wooden drawers and curvaceous bell jars containing hundreds of carefully arranged insect specimens neatly labelled with their place of origin and Latin names.

The pieces in M.A.D.Gallery’s entomological exhibition feature or evoke a wide range of insects – or arthropods, to be exact – with some housed in special wooden and glass displays, some in bell jars, and some bearing their Latin nomenclatures. But, being a M.A.D.Gallery presentation, this is no ordinary collection of critters and its “mechanical” qualification provides that quintessential MB&F twist.

The exhibition features breathtaking butterflies that will put you in a flutter; beautiful beetles that will leave you ‘shell’ shocked; a sublime scorpion with a real sting in the tail; and spiders so spellbinding even the most fearful arachnophobes won’t be able to resist a peek.

Inspired by the writings of Franz Kafka and the work of artists H.R. Giger and Pierre Matter, Gaby Wormann is an artist who, in her own words, “deals with the themes of individual ethics and humanity's uninhibited intervention in complex biological systems”.

Wormann’s mind-boggling creations, which she calls “MeCre” (short for “Mechanical Creatures”) demonstrate a rare dexterity and represent her futuristic vision of the evolution of insects: New, hybrid lifeforms – organisms fused with mechanics – that are more resistant, more efficient and more technically optimised.

The German artist takes tiny components from the world of watchmaking and mechanical engineering – gears, plates, balance springs and filaments, for example – and incorporates them into the bodies of prepared insects – as beautiful bespoke mechanical exoskeletons.

The result is a series of bionic insects that appear eerily real. If the sight of a regular tarantula wolf spider isn’t arresting enough for you, then Wormann’s Lycosa tarantula – with mechanised body and mechanically enhanced legs – takes this arachnid to a whole new level of exoticism. Likewise, her Megasoma actaeon possesses impressive layers of mechanical gears endowing this large-winged rhinoceros beetle with even more three- dimensionality than Mother Nature provided, while Wormann’s Tropidacris dux is a Giant Brown Cricket with elegant, super-sized mainspring-enhanced antennae.

Creating such intricate sculptures demands an exceptional degree of craftsmanship, the keenest attention to detail and a comprehensive understanding of biomechanics. The M.A.D.Gallery is showcasing nine unique pieces by Wormann, including a birdwing butterfly, emperor scorpion and some of the world’s largest beetles. Each “MeCre” piece is presented in solid wenge wood frame featuring a dual glazing technique, handmade in Germany by master carpenter Soeren Burmeister exclusively for the “MeCre” series. 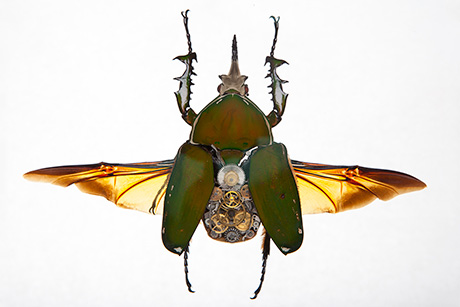 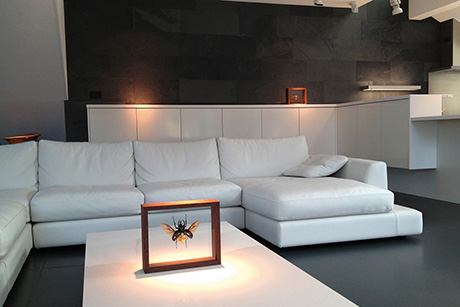 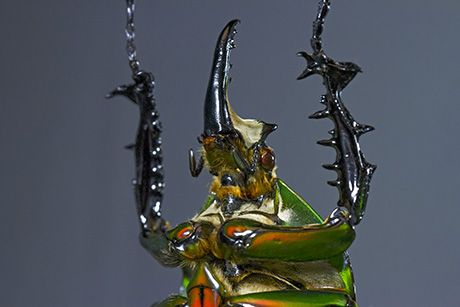 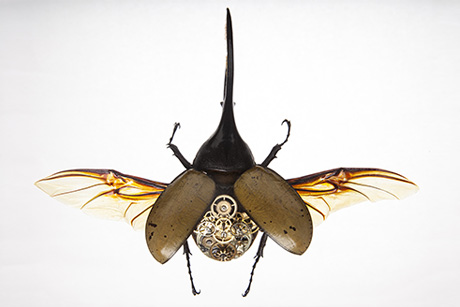 New York-based artist Christopher Conte draws on his diverse skills and experience while using a range of materials and construction techniques to make his spectacular sculptures, including the cast bronze insects that he has christened “Duellona”.

While much of the fine detail of these motifs is captured in the casting process, master firearms engraver Michael Dubber hand-engraves their form for a particularly crisp appearance. Underneath the main body, Conte has placed a watch movement to symbolise the inner workings of this mechanised creature. One sculpture can often take months to create.

Born in Bergen, Norway and raised in New York, Conte earned a bachelor’s degree in fine art before working in prosthetics for 16 years, making artificial limbs for amputees. During this time, he worked in obscurity creating sculptures reflecting his love of biomechanics, anatomy and robotics. In 2008, Conte left his job as a certified prosthetist to begin his career as a full-time artist.

With his in-depth knowledge of the human body, Conte has created steampunk android skulls, cyborgian arms and mechanical hearts. Now, with the likes of “Duellona”, he has shown he is equally adept at depicting the animal world in his inimitable sculptural style.

The M.A.D.Gallery is showcasing “Duellona” in three different versions: white bronze or yellow bronze – both available in a limited edition of 10 numbered pieces – and a unique piece in patina-rich bronze with red garnet gemstone.

Paul Swan Topen has an affinity for vintage clocks and engineering, in addition to a love of butterflies, and the Scottish-born artist and designer has managed to combine these two passions to create his exquisite ‘clockwork’ butterflies, a captivating cross-pollination of insects and mechanics.

Topen takes beautiful fallen butterflies and hand-adorns them by adding intricately sculpted brass bodies that he creates on a traditional watchmaker’s lathe. He also incorporates components from antique clocks and pocket watches, capturing the feel of mechanical, mythological creatures ready to take flight. The mechanisms may look functional, but that is merely a clever illusion that Topen pulls off with aplomb.

Butterflies and clocks may appear to inhabit disparate worlds, however, they have been curiously linked since the original pendulum clock of the 1500s thanks to devices like ‘butterfly keys’ and ‘butterfly escapements’. Topen bolsters this association between the insect and horology through his butterfly-inspired creations.

The M.A.D.Gallery is showcasing eight unique pieces by Topen, including two animated pieces. Each one is set in an ebony frame or in a bell jar.

American artist and teacher Christopher Locke enjoys blurring the lines between man and machine, the old and the new, as well as science and art by using metalworking, fine woodworking and mechanical engineering to create artwork that he describes as “Figurative Industrial”.

One example of this is his ingenious Scissor Spider sculptures that Locke creates using scissors confiscated at US airports by the Transportation Security Administration (TSA) as part of security screenings before passengers board their flights.

“Each year, the TSA confiscates over 8 million items, including guns, knives, narcotics, mousse, pudding, bottled water – and scissors,” says Locke who is based in Austin, Texas. “As a result, countless pairs of scissors are confiscated daily at American airports. I have used actual items that were intercepted by the TSA to make my creepy creatures.”

Locke creates these eye-catching sculptures by repurposing the scissor blades as the spider’s legs and using the scissor finger holes to make up the body of the arachnid.

The M.A.D.Gallery is delighted to showcase five unique scissor spider pieces by Locke as part of its “Mechanical Entomology” exhibition. 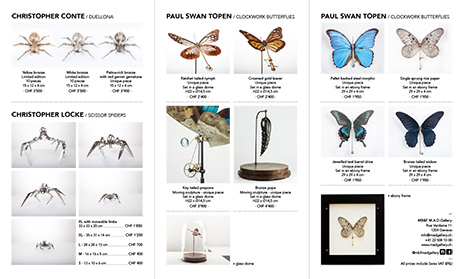