The MB&F M.A.D.Gallery is delighted to host “X-RAY”, an exhibition of x-ray photographs by British visual artist Nick Veasey.

Born in London in 1962, British photographic artist Nick Veasey developed an interest in photography as a teenager before becoming a professional in his thirties. He worked in the advertising and design industries for the best part of a decade, focusing on conventional still photography work, and it was during this time that he first used x-ray as a photographic medium, when he was asked to x-ray a soda can for a TV show. While doing this, Veasey also took the opportunity to x-ray the shoes he was wearing that day and, on showing the final image to an art director, was encouraged by the positive feedback. He soon decided to explore x-ray photography even further.

Veasey has since worked primarily with images created from x-ray imaging. These ethereal and fascinating works have graced galleries all over the world and featured in international advertising campaigns and on product packaging, as well as winning several photographic and design awards.

Over the years, Veasey has created many x-ray photographs, from small everyday objects like teddy bears, ice cream cones and flowers to large multi-component structures such as cars, buses full of passengers and even a life-size Boeing 777 jet and the aircraft hangar housing it.

“I want to excite people and help them appreciate the things around them in a new way,” says Veasey. “X-ray is a very honest process, it shows things for what they are. In this superficial world, that’s quite refreshing. It shows a product or an organic thing for how it is made – the design, the ingenuity that goes into them, warts and all.

“Often the integral beauty adds intrigue to the familiar. We all make assumptions based on the external visual aspects of what surrounds us and we are attracted to people and forms that are aesthetically pleasing. I like to challenge this automatic way that we react to just physical appearance by highlighting the, often surprising, inner beauty.”

In today’s world obsessed with image, superficiality and artifice, Veasey counters these insubstantial diversions by delving deep inside things to discover what they are really made of. Instead of creating or transforming objects, Veasey is exposing something that always existed: Objects we think we know, but actually we do not – not like this anyhow.

Veasey creates portraits using radiographic imaging equipment, taking the x-ray to another level by showing the layers and composition of a range of items in fantastic detail, with everyday objects, both manmade and natural, transformed from the banal to the beguiling.

The artist uses x-rays emitting potentially lethal radiation to take us on a journey into a world that is otherwise concealed and unseen, producing results of great lyricism and grace. Solid matter is penetrated and rendered ghostly and gentle, giving beholders a precious feeling that they are seeing reality afresh with a perspective they have never before experienced.

Veasey’s artwork is a classic example of the fusion between art and science, transcending classification as photography and having the gravitas to motivate venues like the M.A.D.Gallery, but also science institutions, to exhibit his artworks.

The M.A.D.Gallery is exhibiting 8 images created by Nick Veasey – “Matchless Rider”, “Mitchell Film Camera”, “Decks”, “Airport X-ray”, “Typewriter”, “VW Beetle”, “Superman and Clark Kent” and “Lightbulb”. All are available as prints or framed Diasecs. “Superman and Clark Kent” is also available as a lenticular, the resulting animation showing the superhero and his alter ego changing from one character to the other. 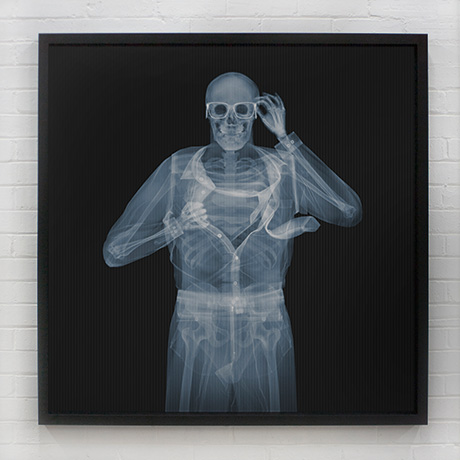 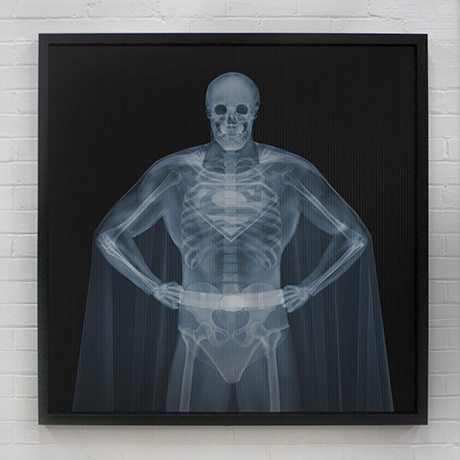 Veasey and his small team work out of his Radar Studio, a converted Cold War spying station that he bought from the military in the middle of a field in the Kent countryside in the south of England. This isolated location is vital because of the potentially lethal levels and emission times of the x-rays that Veasey uses. “There are health issues meaning that you don't really want to have an x-ray machine next door to you,” he says.

To create his images, Veasey uses very slow film which allows for no grain and produces an extremely clear capture. His x-ray equipment is unlike the type you find in hospitals. While a typical hospital x-ray is about 100 kilovolts and lasts 0.2 second, Veasey’s hard-to-find machine is much more powerful, going up to 200 kilovolts and emitting an x-ray for far longer – sometimes as long as 20 minutes.

Understandably, with the potential exposure to such high levels of radiation, Veasey takes extreme precautions. He has constucted his studio so it is made of 10cm/4” thick blocks of a material called lignacite that prevents x-rays from passing through the walls. The floor is made from a high-density concrete that absorbs radiation, while the lead and steel door to enter the x-raying area weighs 1,250kg/2755lbs. “In my career I've had two exposures to radiation,” says Veasey. “That is two too many, because it stays with you for life. It's cumulative.”

“In my career I've had two exposures to radiation”

The ultra high levels of radiation also mean that when capturing human or animal forms, Veasey must use either a skeleton or recently deceased corpse that has been donated. “People do donate their bodies to art and science. And when they do, I'm in the queue,” he says.

Every image taken is to scale and captured on 35cm by 43cm (14”/17”) sections. That is more than enough room if he is x-raying a lightbulb, but for something like a VW Beetle, it means Veasey has to dismantle the whole vehicle, x-raying every single component individually – months and months of work. 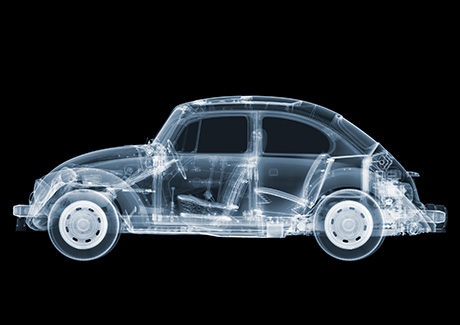 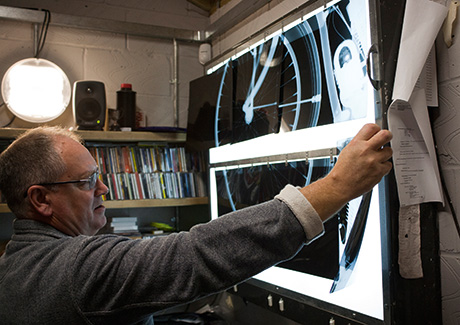 “X-Raying a car all in one go is technically possible,” he says. “But it would produce a very confused image. I break everything down, x-ray it piece by piece, get everything as beautiful as it possibly can be, and then build it back together.”

Veasey eventually turns all his x-ray into digital files by scanning them on a 1980s drum scanner – “a beast of a scanner”, one that creates the “most fantastic, high-resolution” images, with much better detail than any other scanning device he has tried. The files are then imported to a computer and patiently stitched together digitally with the visible overlap of the numerous x-ray sections removed.

Veasey admits that he derives much of the joy not just from the final images, but the journey he has taken to arrive there.

“The great thing about x-ray is that once you think that you know it, it comes and bites you in the backside and surprises you,” he says, admitting: “I often get it wrong. Everybody makes mistakes. And you learn by your mistakes. You can overexpose an image, you can underexpose an image. You sometimes don’t see enough tonal detail. It’s similar to photography, but because an x-ray is a transparent picture, you haven’t really got a focal point to deal with. And you haven’t got lighting to deal with. X-ray is a spectrum of light in its own right. It’s just invisible to the human eye.” 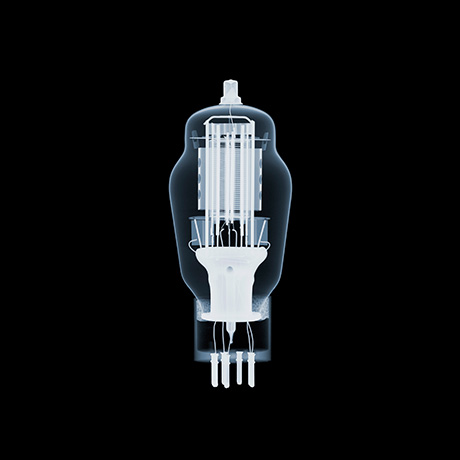 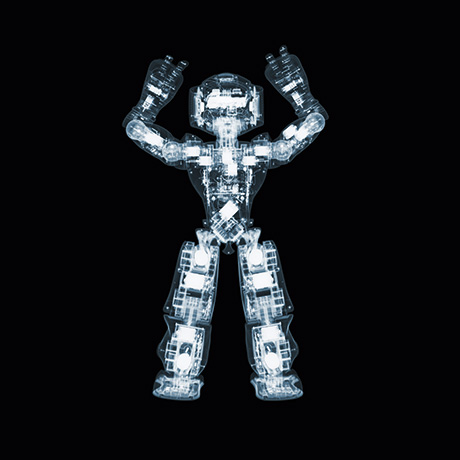