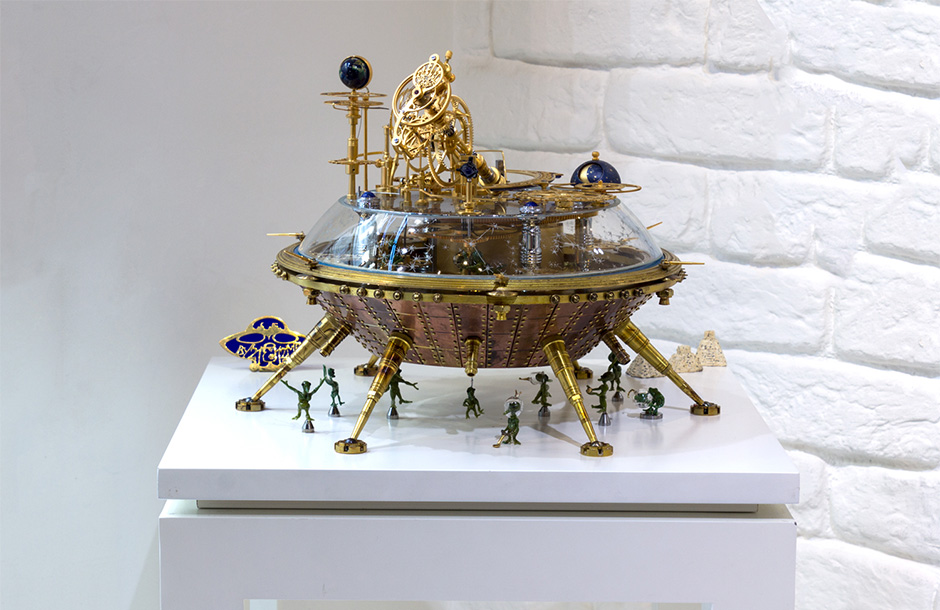 Miki Eleta was born in Bosnia-Herzegovina. He was in Andalusia when at 7 he fell in love with music being woken up by the sound of Flamenco. He managed to get a hold of a guitar and learned to play with it for years. The summer of his 23rd year, he flew to Switzerland to spend a few months with his sister who lived there. He finally settled in Zurich, keeping in mind what he really wanted to do with his life which was eventually creating his own machines.

Miki developed his artistic career as a kinetic sculptor. At the beginning of the 1990s, Miki focused primarily on restoring antiques, then clocks. Up until 2001 a client came up to him questioning the precision of his pieces. How dared he pretend to restore clocks considering that he didn’t know anything about the art of clock-making? Slightly touched in his ego, Miki took it as a challenge and asked the client for a year in which he would create a full-fledged clock to prove that his work was precise.

Knowing absolutely nothing about clock-making design, he contacted Paul Gerber, a member of the prestigious AHCI (Horological Academy of Independent Creators) and known for his innovative clockworks. Miki called upon this Bernese clockmaker for a complete explanation of the internal workings of a timepiece.

At the age of 50, where most human-beings would have already settled on a career occupation, Miki Eleta taught himself how to build clocks. And his clocks, for all their horological qualities, cross that fuzzy line between ‘craft’ and ‘art’. They are true kinetic art. Miki Eleta is a completely self-taught clockmaker who used 365 full days a decade ago to learn everything about an art he knew nothing about.

On his spare time, he is also a loving husband, caring father and loving grand-father who adores to cultivate tomatoes in his garden and to ride his bike everyday looking at what is surrounding him to get inspired.

All of Miki’s creations are unique.

Startling landing of an unidentified flying object at the M.A.D.Gallery Geneva

According to eye witnesses it appears to be a clock-like mechanism containing discernible complications. Indeed, experts are currently debating whether they are dealing with a Tourbillon as the object in question remains in motion on account of its own surplus weight. Never before has such a construction been seen in the world of watches. Additionally, the UFO seems to display minutes, hours, week days and even moon phases but it is the world clock display which may turn out to be one of the attention-grabbing features.

The origin of the creatures inside the object is still unknown. Following covert observations there have been reports of an organized community of little green people. One of them, who is likely responsible for steering the object, was seen when he was attempting to orientate himself aided by a glass ring and stellar constellations. Meanwhile, a different member of the group was occupied with a three-eye periscope. Indeed, a photographer managed to take sensational pictures when one of the occupants left the UFO in order to move up and down and explore the surrounding area making use of a detector. However, the responsibilities of a floating occupant remains mysterious.

The landing of this unidentified flying object invites speculation. In recent days, there has been talk in esoteric circles which pointed to a specific Mayan prophecy that predicted the return of a god called Bolon Yokte from space to earth on December 21st, 2012. Since the conversion from the Mayan to the Gregorian calendar leaves us with a gap of approximately 20 years, determining the exact date of the landing poses severe difficulties.

However, a self-described psychic from Switzerland, who has expressed his preference to remain anonymous, has claimed to have established contact with the occupants of the UFO. Apparently he has learned that the UFO is going to rest at the M.A.D.Gallery for several weeks before leaving for a different civilisation on yet another long flight. 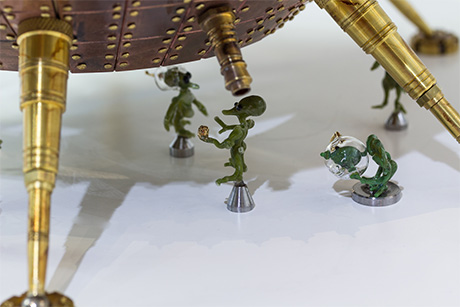 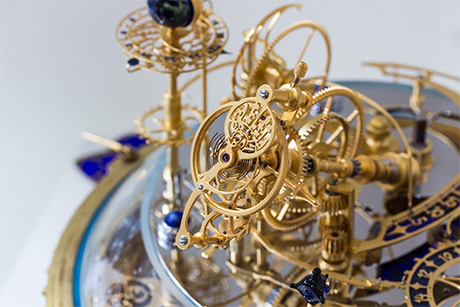 Six of Miki’s unique pieces were exhibited at the MB&F M.A.D. Gallery from the 19th of January until mid-February 2013
For more information and a potential visit in Miki's workshop based in Zurich, please visit: www.mikieleta.com

HIPPOCAMPUS is 2.8 metres high and features a musical movement in which the melody will not repeat itself over a hundred years. In a world premiere at the MB&F M.A.D. Gallery (January 2013), Zurich clockmaker Miki Eleta presented his latest timepiece – HIPPOCAMPUS – his largest creation to date.

The CONTINUUM MOBILE is a timepiece powered by a falling weight and features a tourbillon visible above the oblique axis. The weight powers the gear train, causing it to advance. Miki calls the Continuum his “inspiration clock.” When he doesn’t have it, he is lost. When he is lost for inspiration, a situation that occurs, by his own admission, very rarely, Miki gazes at this clock. The winding mechanism is located within the column and it is rewound using a key to generate 100 hours of power reserve.

The PENTOURBILLON is a timepiece with a flying double tourbillion and two distinct mechanisms. On the left part of the clock was created the tourbillion to showcase the magic and beauty of its escapement. The petals of the flower at the back of the timepiece open and close as day transforms into night. The right part features a “simple” clock where the indicators are two long dials.

LA LUNA is a double pendulum clock constructed from a 1.2 metre steel and chrome column. The jumping hour becomes visible before the full hour. In addition to the indication of the hours, minutes and seconds, the timepiece displays phases of the moon, signs of the zodiac and the different seasons.

N°26 has an Eleta chronometer escapement that produces an impulse every two seconds and holds a power reserve of eight days. The winding weight is astonishingly light – only 200 grams. The phase of the moon indicator makes up part of this weight and is linked ‘mysteriously’, i.e. without a visible mechanism, to the movement.

DIE SIEBEN is not a clock but a kinetic sculpture possessing tiny steel balls that travel through passageways, creating an interplay that is both visual and acoustic. Measuring nearly 1.4 metres in height and 60 centimetres in diameter, DIE SIEBEN chimes 16 different tones using 16 passageways around the clocks circumference, where the steel balls move along touching 16 pentatonic cylinders and 47 gears. These gears return the balls through the passageways to the sound of a tune that only repeats itself every seven years. 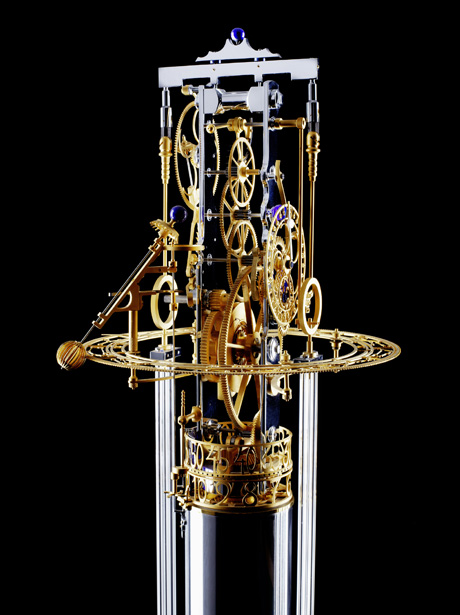 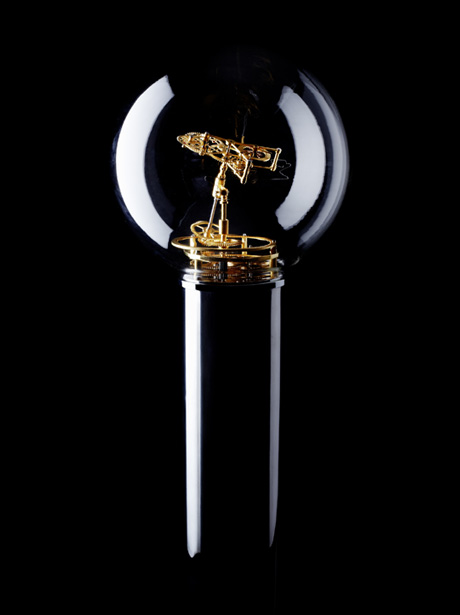 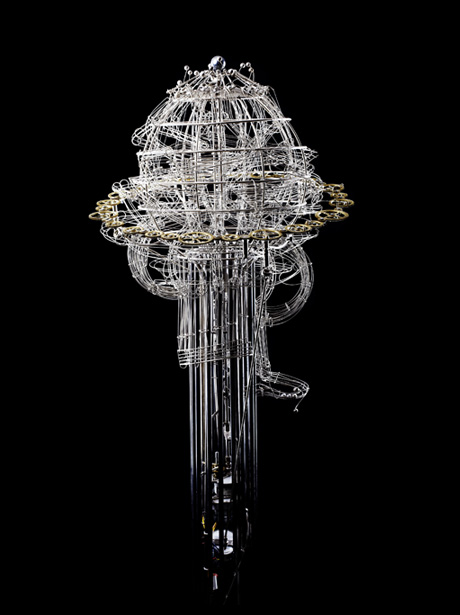 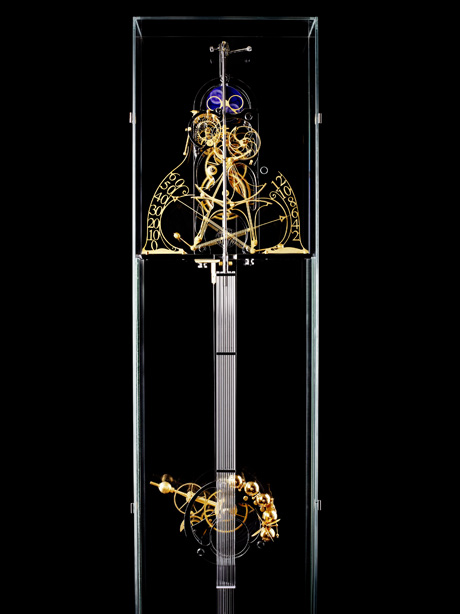