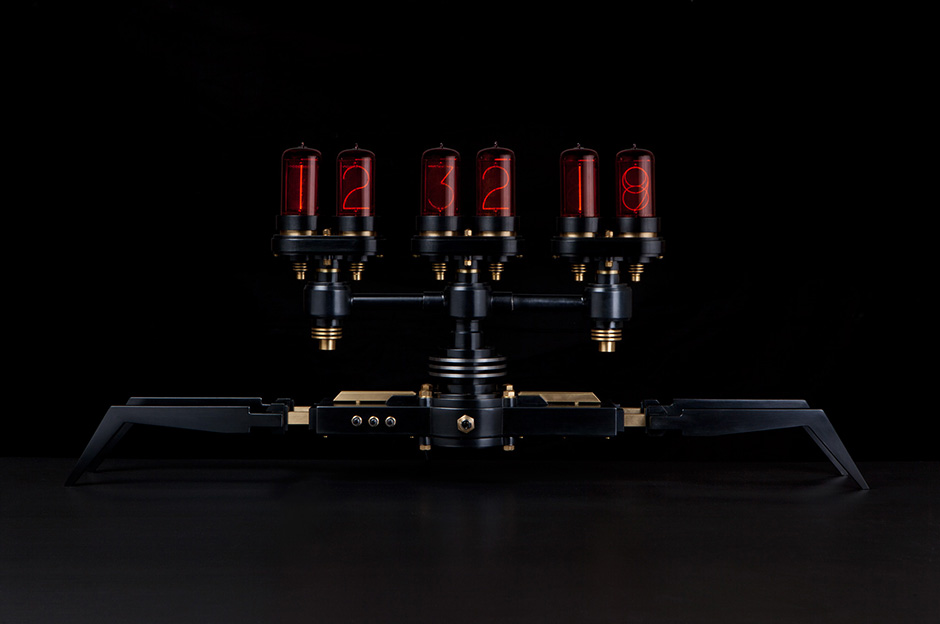 Crafted out of burnished steel and brushed brass, and featuring six glowing Nixie tubes made half a century ago, Nixie Machine – created by German artist Frank Buchwald for M.A.D.Gallery and based on an idea by Alberto Schileo – is a clock like no other. Each one of Nixie Machine’s glowing six digits is displayed via an original, incredibly preserved Z568M Nixie tube manufactured by RFT in East Germany during the 1960s.

The six tubes are presented as three pairs – for hours, minutes and seconds, or day, month and year – atop an eye-catching structure built in Buchwald’s signature “heavy engineering” style, as he puts it, that he established in his Machine Lights series. The stunning retro-futuristic design, bearing four legs and body-like symmetry, could have stepped straight out of a sci-fi movie.

Sourced by Schileo, the Nixie tubes used in Nixie Machine are among the largest – 90mm in height – and rarest ever made, and are combined with electronic circuitry to create a glowing six-digit display. The radiant discharge of the Nixies coupled with the assertively engineered structure makes Nixie Machine, in the words of Buchwald, a veritable “altar of time”.

Nixie Machine is available in a limited edition of 12 pieces.

Frank Buchwald was born in Hannover, Germany in 1956. After studying design at the University of Arts in Berlin, he worked as a freelance artist and science fiction illustrator until 1993 when he turned his attention to designing and manufacturing furniture and other objects out of steel.

A decade ago, in his Berlin atelier, he started to focus on making his acclaimed Machine Lights series – imposing hand-crafted sculptural lighting objects featuring blackened steel, brushed brass and visible light filaments emitting a warm, yellow glow. Buchwald has created Nixie Machine using the same idiosyncratic style of design and engineering as the Machine Lights, but this time his starting point was spectacular Nixie tubes made in East Germany at the height of the Cold War.

He says: “I am fascinated by the uncompromising functionality of machines and their strictly form-follows-function design. I wanted Nixie Machine’s main structure – the four flared legs and three arms in the centre – to confidently carry the time, yet not distract the viewer from it. For me, the six Nixie tubes needed to take centre stage.”

The artist started, as he always does, by making a sketch of the structure on paper with pen and marker – Buchwald eschews modern computer design programs.

“I am passionate about sketching and drawing because they allow me to bring my visions to life, they help me find the essence of a new object,” he says. “If I don’t manage to make something of the ideas in my mind then I have a feeling of dissatisfaction. I’m a little bit obsessed like that, maybe a little crazy.”

A more detailed planning phase followed, before he set about constructing a prototype Nixie Machine that, from design through to completion, took almost a whole year. Once the prototype was perfected, Buchwald started work on the limited-edition production pieces.

Each Machine features no fewer than 350 components, each one painstakingly hand-crafted by Buchwald himself out of bars and blocks of raw metal.

“Metal is the perfect material to work with creatively,” he says. “You can use a variety of techniques for working with metal. It has energy and power. Working with materials like steel excites me, which probably seems a little archaic in this digital age.”

“Metal is the perfect material to work with creatively”

Buchwald meticulously hand-polishes each brass component and, for the blackened steel parts, burnishes them by repeatedly heating and dipping them into acid to achieve a silky, black oxidation – all of this with his bare hands. Each Nixie Machine requires months of intensive, fully-focused work meaning Buchwald is realistically only able to make about six Nixie Machines per year. Each one is numbered and signed by the artist. And the fact that each component is hand-made by the artist means that no component is ever exactly the same. In this sense, each Nixie Machine is unique.

For the final assembly, Buchwald worked together with an electrical engineer to ensure that his structure, combined with the Nixie tubes and clock circuit boards, functioned as an exceptional clock. And it is this horological element that provided him with a particular stimulus while creating Nixie Machine.

“With Nixie Machine, the way I have combined a metal and a luminous element is not dissimilar to my Machine Lights,” says Buchwald. “But this time, there was a numerical aspect to my creation – a clock – and I found this fascinating.

“When you grapple with numbers – sequence them, order them – you soon end up working with a numerical philosophy. We have often believed that, with numbers, we can penetrate to the essence of things, to determine their course or even manipulate them. No wonder algebra and geometry became the driving force of human civilisation and technology. At the same time, through our fascination with numbers, we have subjected ourselves to the dictates of time. So it is no exaggeration when we consider the Nixie Machine as an ‘altar of time’.”

The name Nixie is thought to derive from the Burroughs Corporation’s “NIX I”, which in turn was believed to have stood for “Numeric Indicator eXperimental No.1”.

Each glass tube is filled with a neon-based gas at low pressure and features a wire-mesh anode and layered cathodes shaped like numerals – one separate cathode is needed for every numeral 0 to 9. A distinctive orange glow discharge surrounds each cathode when power is applied to it. By connecting electronic circuitry to several tubes, multi-digit Nixie tube displays were often used for computers, clocks and frequency counters, though were eventually supplanted by more practicable, less costly – yet arguably less charming – displays such as light- emitting diodes (LEDs).

Nixie Machine features six incredibly preserved, hard-to-find Nixie tubes from the communist era that have been stored for decades in a sealed Bulgarian army depot. This ‘new old stock’ was sourced by MB&F friend and Nixie clocks collector Alberto Schileo, who was also responsible for the electronic circuit board – a clock board – to create Nixie Machine's visually arresting six-digit time and date display.

Schileo says: “This was a once-in-a-lifetime opportunity to acquire such beautiful ‘new old stock’ in such quantity. I started thinking about a high-end Nixie clock and Frank Buchwald’s work immediately came to mind. I had no doubt that Frank would be able to create something along the same lines as his Machine Lights, something spectacular that incorporated the Nixie tubes.”

Nixie Machine’s clock is powered by a direct drive mechanism.

This is where each digit of each tube is controlled individually, and power is applied to the cathode all the time while it is lit. This sophisticated circuit is demanding to build, but is easier on the tubes over time and helps maximise their lifespan.

Nixie Machine’s clock circuit board has both a GPS receiver and DCF77 receiver for time and date setting. Manual setting is also possible. There are a variety of date and time formats, and different ways of displaying those, including fading effects. One key feature is a programmable flip over effect where the digits count fast from one digit to the next, like the reels of a slot machine.

Being able to regularly cycle through all the digits of all the tubes helps to prevent ‘cathode poisoning’ – when regularly unused digits accumulate a deposit and eventually cease functioning – thus maximising the life of each tube.