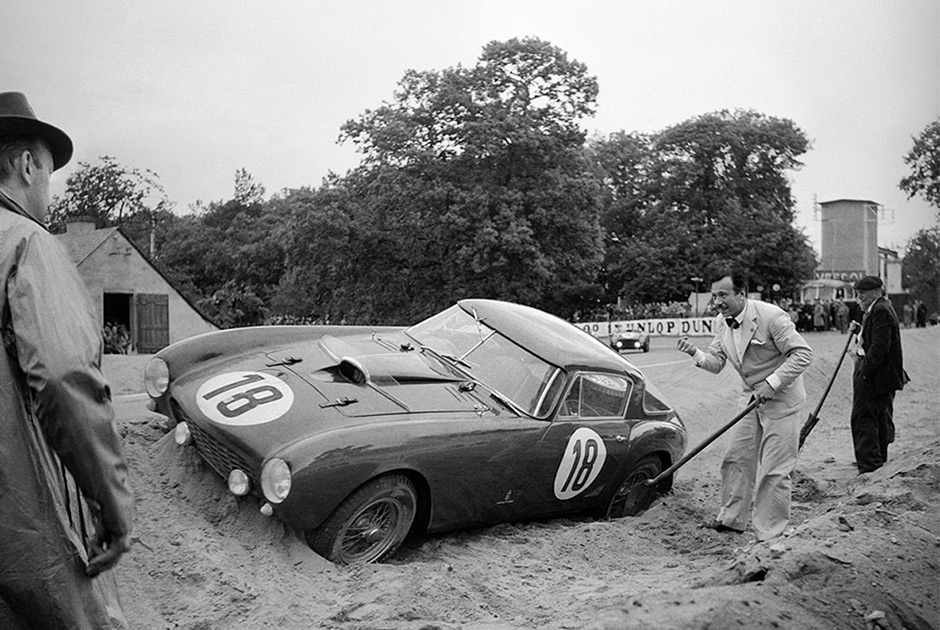 The MB&F M.A.D.Gallery proudly presents ‘For the Thrill of Speed’ by Berque & Brison, a Collection of Historic Photographs of Racing Heroes at the M.A.D.Gallery

Driven by passion, the duo of Daniel Berque and Serge Brison are fervent car enthusiasts working to uncover and restore lost moments in motorsport photography. ‘For The Thrill of Speed’ unveils a curated collection of masterful, black-and-white images capturing the intense highs and lows of legendary drivers.

Daniel Berque and Serge Brison met while attending the Liège-Sofia-Liège marathon rally in 1995, where they discovered shared passions for both motorsport and photography.

Since their chance meeting they have participated in numerous rallies, including the Monte-Carlo Rally an astonishing six times, and eventually launched a business together.

In 2009, the Art Speed Gallery was born. “We are particularly delighted to have been able to transmit our passion to all craftsmen and artists involved in the making process. It is a passion for excellence above and beyond customer expectations,” states Berque.

As automotive addicts at the MB&F M.A.D.Gallery, we are unquestionably crazy about Berque & Brison’s work. It checks all the boxes: the impressive artwork not only preserves the history of automotive racing, but also celebrates the glorious beginnings of this thrilling, challenging sport.

FOR THE THRILL OF SPEED

This selection of six images providing a look back from 1925 to 1963, a period of tremendous change in motorsports, provokes emotions through the heartbreaking events and triumphs that occur during racing competitions such as the renowned 24 Hours of Le Mans.

Each photograph stops time to share a momentous story of the pioneers of racing, portraying heroic pursuits of the finish line as well as epic crashes.

The talent behind most of these original shots is the highly acclaimed French photographer, René Pari. Born in 1913, Pari was recognized for his perfect technical mastery and exceptional ability to snap the optimal shot at just the right moment in time. The Berque & Brison team procured Pari’s treasured negatives, majestically reviving them using a delicate restoration process. 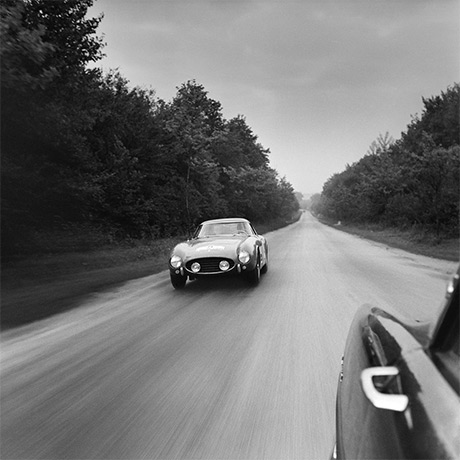 "Motorsport is clearly a mechanical thing, but the story is mostly about human relationships."

In the image On the Road to Victory - Alfonso de Portago - Tour de France 1956, Pari freezes time in a way that conveys the exhilaration of speed. This powerful composition reveals the horsepower of the Ferrari 250 GT no. 73 (chassis 0557GT) by perfectly contrasting the blur of the road with the sharp focus of this sensual car.

To capture this iconic shot, Pari achieved the impossible by leaning out of a press car with a twin- lens Rolleiflex, a technical challenge given the situation. Additional prestige is provided by the legendary drivers, Spanish nobleman Alfonso de Portago and American Edmund Nelson, who together secured first place during the 1956 Tour de France. The duo was tragically killed in a crash during the 1957 Mille Miglia.

“These are undoubtedly great testimonies of technical expertise and true artist’s eye, the pioneers of motor racing immortalized by the pioneers of photography,” explains Berque. 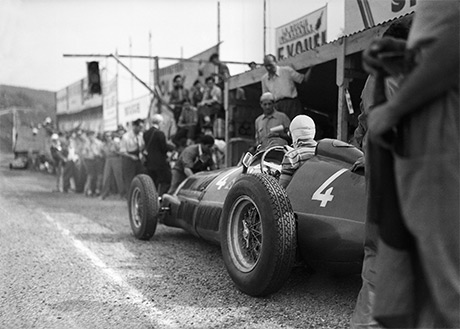 A master of photography, Pari secured the poignant Achille Varzi - Spa 1947 using a Graflex Speed Graphic view camera, a complex machine requiring several steps to successfully operate, including loading a new 4x5 inch sheet film holder for each exposure. This picture depicts the determination and focus of Italian driver Achille Varzi surrounded by an enthusiastic crowd at the X Grand Prix Automobile de Belgique (VIII European Grand Prix). His Alfa Romeo 158, nicknamed Alfetta, is an important car in automotive history as it won 47 of the 54 Grand Prix races it entered. 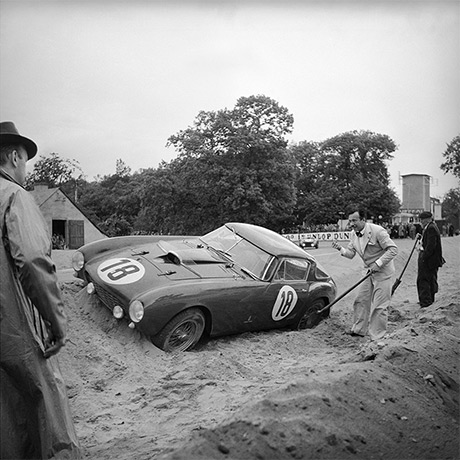 Such is Life in Racing – Le Mans 1954 portrays an unfortunate incident in which Italy’s Count Innocente Biaggio and Dominican playboy Porfirio Rubirosa raced a Ferrari 375 MM no. 18 (chassis 0380) entrusted by Luigi Chinetti, founder of the North American Racing Team, an early arm of Ferrari in the United States. Speeding around the famed Mulsanne corner of the 24 Hours of Le Mans, the car uncontrollably spun out into the sand banks. Biaggio was determined to get back on the track by digging out the Ferrari even while sporting a light grey Alpaca suit, silk shirt, and black bowtie – true class!

His efforts prevailed for about an hour, after which he threw in the towel. He dusted off his trousers and shoes, replaced his hat, and lit a cigarette. Pari was in just the right place at the right time to capture this iconic moment in racing history. 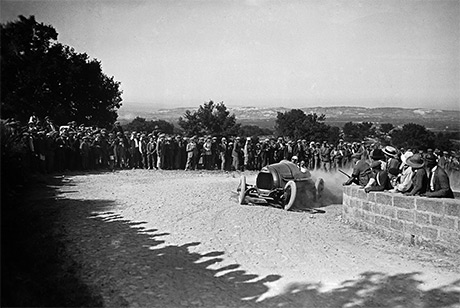 The storytelling continues both on and off the track: Mont Ventoux 1925 by an anonymous artist takes us to the south of France in 1925 where the uphill climb of a Delage DF was captured perfectly with a Linhof Technica Master view camera, now precisely restored to excellence. Motor racing doesn’t come without its pains, as the Such is Life in Racing - Reims 1951 shows the grit and perseverance of works driver Consalvo Sanesi pushing the Alfa Romeo 159 no. 6 after a mechanical failure.

These quintessential racing moments don’t always happen on the track as Behind the Scenes - Le Mans 1963 shows: it provides insight into the secret preparation of the Porsche team for the 24 Hours of Le Mans in 1963. 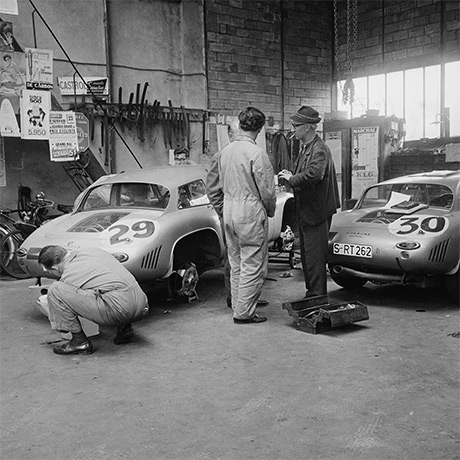 On a mission to unearth rare and unobtainable negatives themed around automotive racing, Berque & Brison face a unique challenge: 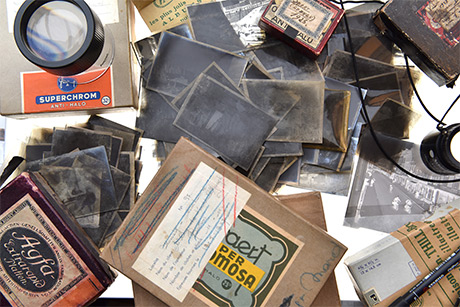 Once a significant negative is chosen, their goal is to blend the best of the original with the advanced technology of today. This begins with a talented team of restoration artists to remove the marks of time, including breaks, scratches, slits, folds, and stains, using specific techniques depending on the nature of the problem. In many cases, this requires an enormous amount of work and time depending on the photographic negative mount along with its age and level of preservation. 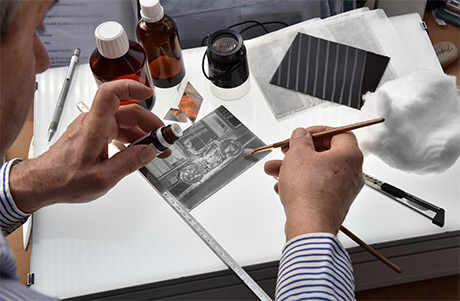 This meticulous restoration work may take a few hours for a gelatine negative up to several weeks for a highly damaged glass plate. The work finishes with fine-art-quality printing of the negative, a crucial and decisive stage to properly frame the work of the artist.

“We scrupulously respect the negative of the photographer; we don’t have the moral right to make any changes or modifications to his work,” explains Berque, “It’s also this strict respect that gives our collection its exceptional and unique nature.”

Each original negative of “For the Thrill of the Speed” produces a limited collection of 21 fine art photography prints bearing a certificate of authenticity, including a serialized hologram. The artworks are printed on museum-quality paper and mounted under Diasec, a premium anti-reflective acrylic glass, and framed in aluminium. 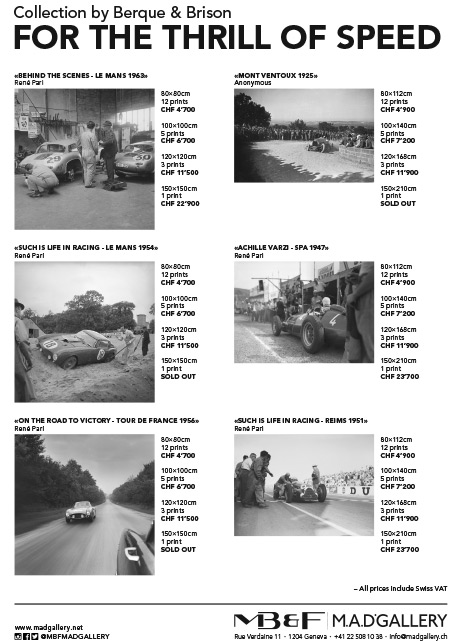 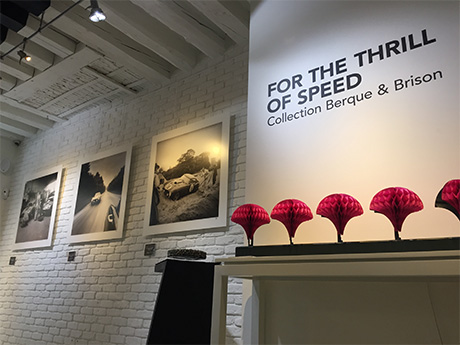