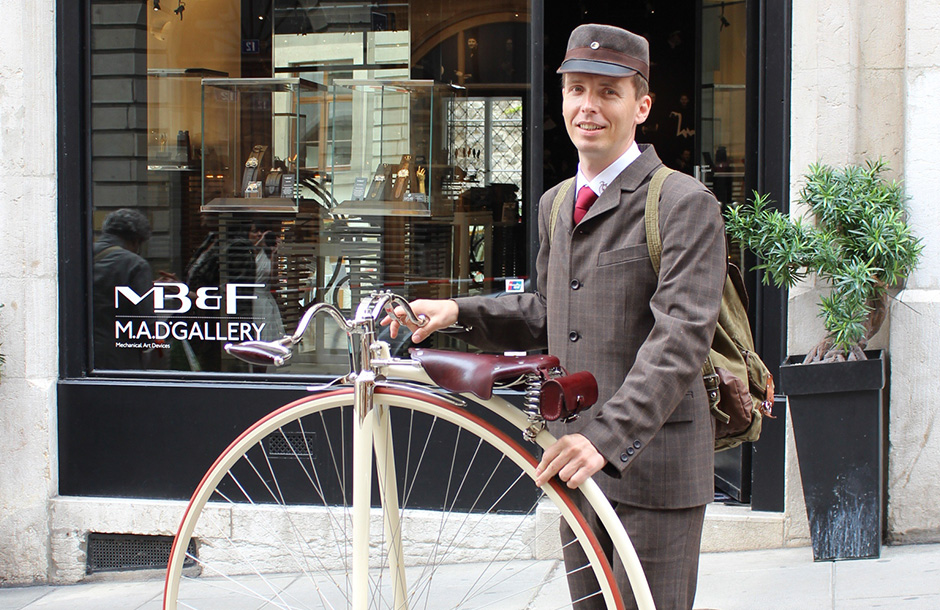 The story of Mesicek high bikes does not begin back in the 1880s when bicycling was the preserve of top-hatted men wearing monocles and morning coats; it starts a century later in communist Czechoslovakia, as it was then called.

In the small town of Kyjov, 200km from Prague, Josef Mesicek (Zdenek's father) found an old battered penny-farthing and had a life-changing idea. There was a local cycling club, boasting 64 members but with just two bicycles, provided by the government. What you need to know is that personal liberties were very restricted under the communist regime, practicing sport was one thing people were allowed to do, or even more...were encouraged to do! 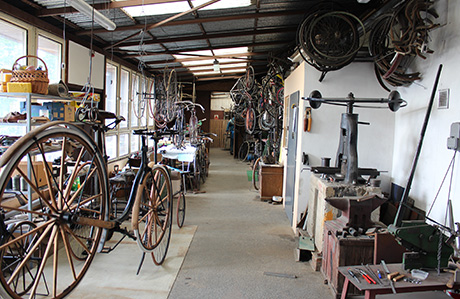 Josef saw his antique penny-farthing an opportunity to increase the club’s bike collection by one, in order to introduce young riders to this classic form of cycling. He took the high-wheeler apart and successfully rebuilt it. But one bike wasn't enough for all of the members,  so he decided to create all by hand another. And then another up until high bicycles went from being a casual hobby to an extreme passion. A passion Josef passed on to his son Zdenek.

In the last five years Zdenek has taken over the running of the company from his father and now employs four people in their workshop in Čeložnice, next to Kyjov. A metal turner, two polishers (including a burnisher) and someone for the milling work are precious help to Zdenek who oversees the whole production process including sourcing the material, welding and polishing the trickier parts, to final assembly.

Driving all the way from Czech Republic to Geneva (a 19-hours drive) Zdenek Mesicek insisted on installing his penny-farthing at the M.A.D. Gallery.

Penny-what? One may wonder... well, a penny farthing is one of the most iconic bicycles ever created, and yet with the most idiosyncratic design. Back in 1870 when penny farthings were proper means of transport, it is hard to imagine how somebody once thought that perching a rider on top of a giant wheel with their feet incapable of touching the ground was a common thing to do.

Every component is hand-fashioned to his very exacting standards.

Nothing is rushed. For Zdenek, Mesicek bicycles reflect the design principles of the early high bicycle.

Mesicek bikes are all hand-fashioned with just scores made every year – in total, only 770 have been made to date in the two decades since they have turned their penny-farthing passion into a full-time business.

It is a long way from 1980s communist Czechoslovakia to the MB&F M.A.D. Gallery, but Mesicek penny-farthing bicycles have made it.

We encourage you to come see, try, admire, buy or order Mesicek's penny-farthing! 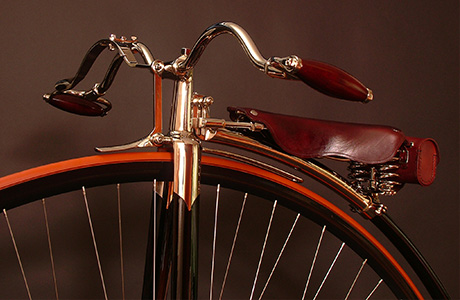 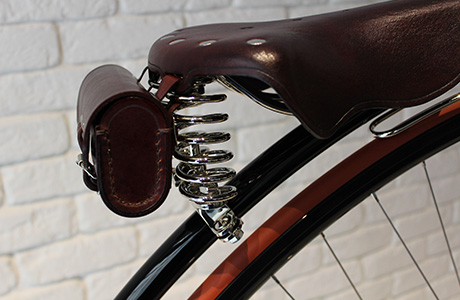 I was born on September 22nd, 1976, grew up in Kyjov, Czech Republic. My wife and little baby also live there now with me. Our workshop is in Celoznice near Kyjov.I attended secondary traffic school – which is a specific study branch – as an engine driver. As soon as my father had his own firm I changed study branch to learn mechanics (work with lathe, with milling machine, welding). I originally wanted to be an engine driver. I was already repairing bikes during my studies. I have never done anything else then producing bikes. When I was at school, we were already producing bikes at home!

What do these bikes inspire you?

I like old-time things and a high bike was a step in a development of means of transport in our history. Sometimes I would like to return to a period of high bikes 1870-1885. I would like to see their manufacturing processes and I would love to implement these to our production.

Why dedicating your life to high bikes?

At the beginning high bikes were just our hobby. Through the time it became our work and our life style. I think that these bikes have still a charm of old time and I believe it is still possible to get some sport performance out of them.

How do you feel at the completion of a piece?

It is a feeling of responsibility. The bike has to look well and it must be safe for the rider and for his surroundings as well. It is a feeling similar to a situation when your child becomes an adult, leaves your home and goes on his own journey through life. I know where and how a bike should ride and if necessary I can offer support or service.

You experienced communism, how did it affect your life choices?

At the fall of the Berlin iron wall and the time where the Velvet revolution got to Czechoslovakia I was six years-old. I had no idea what happened. Most of actions and events happened in our capital Prague.

During communist regime we all had to study a Russian language (no other language was allowed). It was only possible to travel to the eastern communist countries and in the case when you wanted to travel to the east you had to ask the government (the communist party) for permission. After the revolution there was an opportunity to learn foreign languages but the languages were taught by the same teachers who had taught us Russian language before. So the level of lessons was very low and the teachers were just several lessons before us. I chose German.

The transition from communism to capitalism with production of bikes was not so wild for us. Our work was and still is our hobby. We only started producing bikes a few years after the Velvet revolution. We had no business plan and sometimes we were on breadline. At the beginning we didn’t know how many people would be interested in the bikes and if we could manage the production. We just wanted to produce the bikes for us. My mum paid everything regarding our household from her salary, Dad paid everything regarding production. I went on seasonal work, I strung and centered bikes.

We started without money, without any loan, without any room for production. We produced it in our garage without any experience. I remember that sometimes people laughed at us for what we did. We started with old car Skoda 120 L with a trailer. During travelling we slept sitting in a car in the night. Sometimes we slept in a sleeping bag on a floor on a carpet in our workshop. We moved our workshop five times!

Five years ago I bought all the machines and material from my father. Now I own the company alone and my father is retired

When and how did you discover the first original “high bike”? What was your very first thought when you first laid your eyes on it?

I discovered the first bike in a local museum in Kyjov. It was in a bad condition. So I repaired it and that is why I was allowed to borrow it. It then came to our mind that it is an interesting means of transport.

Who do you consider the “brave” pioneers? And why?

Everybody who aims for something and works honestly is for me a brave pioneer. For example somebody gets everything from parents, a lot of money, a house, a car and he/she does not need to aim for anything. On the other hand there are some people who study hard, find a good job and still aim for something. My wife´s mum died when my wife was 14 year old. She had to take care about a lot of things. In the night she used to go at a part time job. She graduated from two universities. She is very hard working but she is a modest women. In the same way her brother who does all these translations to English for me. These are brave pioneers for me.

Why did you accept to collaborate?

I was surprised by a quality of your work, your world-wide spread of your branches. I was delighted by your interest. Next reason why I decided to work with you is that I would like to increase a quality of sales of our products. Long time ago I was in Viena. I was walking in the center of the city and saw some galleries. That time I said to myself that it would be nice if once any of our bike would stand in a similar gallery. Now the MB&F M.A.D. Gallery starts to meet my dream! 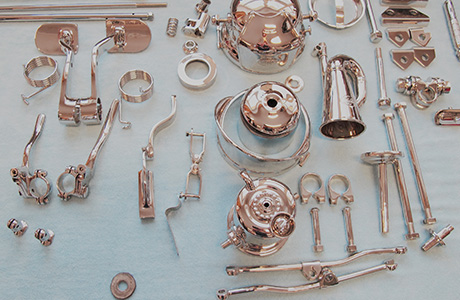