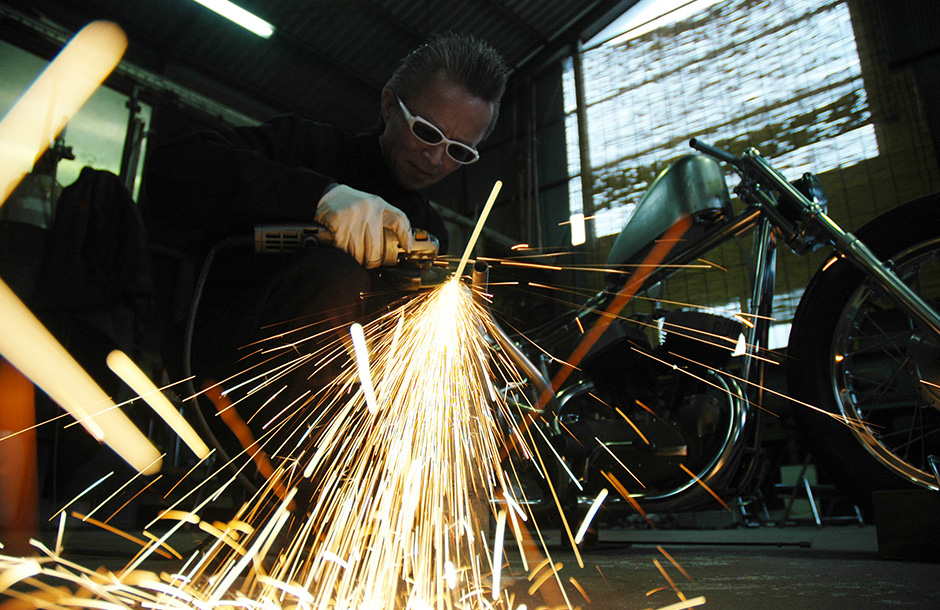 Thinking about Chicara Nagata’s motorcycles as a simple mean of transportation would be insane! You could ride them, you could perform on the road, but unfortunately, it wouldn’t be legally allowed.

For the past 20 years, this Japanese artist has been dedicating his entire energy to the creation of art pieces, most commonly known as motorcycles. An engine, that paradoxically almost killed him in a terrible accident at the age of 16. Chicara spent 8 months at the hospital fighting for his life. Thanks to multiple blood transfusions and doctors’ follow-ups, he was able to live. However, he keeps wondering why his life has been saved amongst others who didn’t survive similar accidents…

In 1992, Chicara is 21 and launches his own design studio he names ®Chicara Inc. before he starts creating custom motorcycles one year later. In order to honor the machines that nearly took his life away, he describes his art as an expression of gratefulness to the people who donated their blood and worked to save his life… his way to give back to society.

Chicara draws, crafts and assembles close to 500 components that he adds to a vintage engine, manufactured between 1939 and 1966. 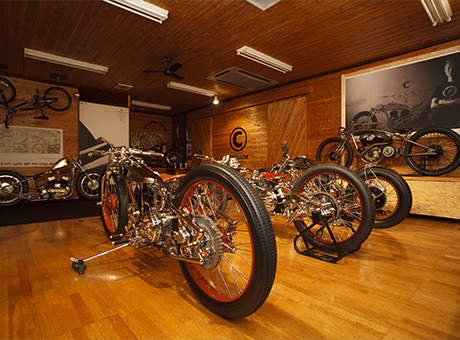 The amount of pieces and time spent on each machine gives a completely different dimension to the motorcycle. His obsession for detail is not surprising when you know that he is a graphic designer who spent nearly 3 years into the completion of his first piece of art CHICARA ONE, he finished in 2004 after 7500 hours of work.

In 2004, he took his passion one step further, elevating his work to what can be considered an art form. He starts a series of unique pieces he names CHICARA ART-  one to four- which makes him rapidly win 6 consecutive awards at shows in Belgium, France, and Germany  before garnering global recognition at the AMDChampionship (the most recognized custom bike award worldwide.) Chicara Nagata became World Champion of Custom Bike design when he took the first place for CHICARA ART ONE in 2006 and the second place the following year with CHICARA ART TWO, both in the freestyle class of the AMD.

If you picture Chicara as a bosozoku- a member of a rebel Japanese bike gang, hairy, tattooed, driving around with a bad boy style you got everything wrong. Chicara is actually a peaceful and passionate artist who lives by himself in the Saga prefecture of Kyushu island, 18 hours away from Tokyo. His mind and power of creation are only driven by spirituality and zen attitude.

The Chicara Art One is the first motorbike of Chicara Nagata's unique series.

He created it in 2006 with a vintage 1939 Harley Davidson flathead engine, and over 500 components made of steel, copper, aluminum, brass and nickel all crafted by hand.

With its 260 kgs of metal, and 1200 cc. power, Chicara Art One took over 7500 hours to be completed, which represents over two years of intense work. 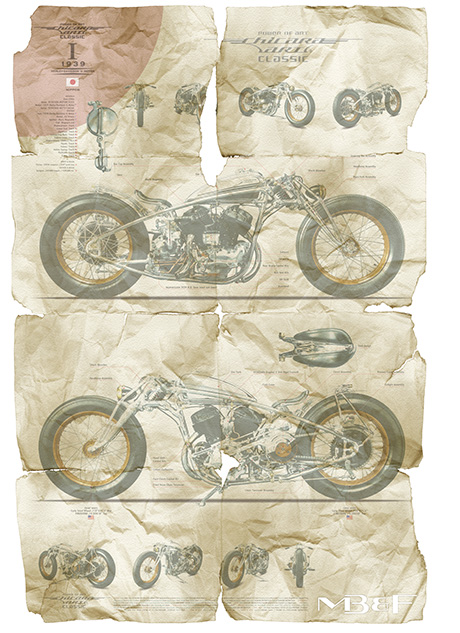 Chicara took the first place for the Chicara Art One at the AMD Championship (the most recognized custom bike award worldwide), which sacred Chicara as the World Champion for custom bike design in 2006. 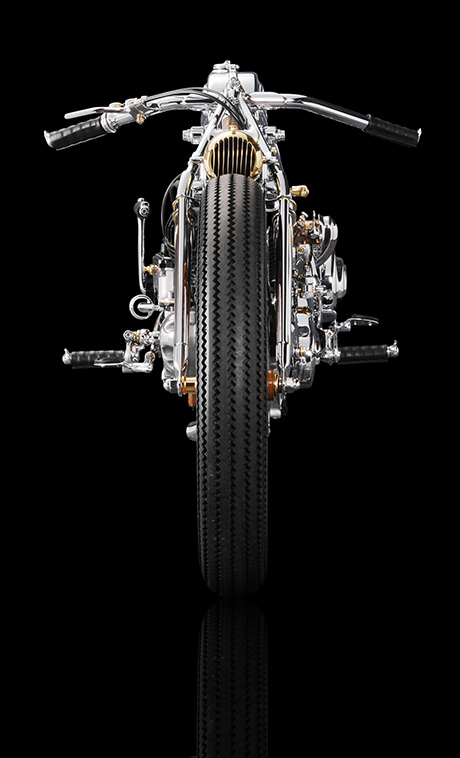 He created it in 2008 with a vintage 1950 Meguro engine, and over 500 additional components he crafted by hand. 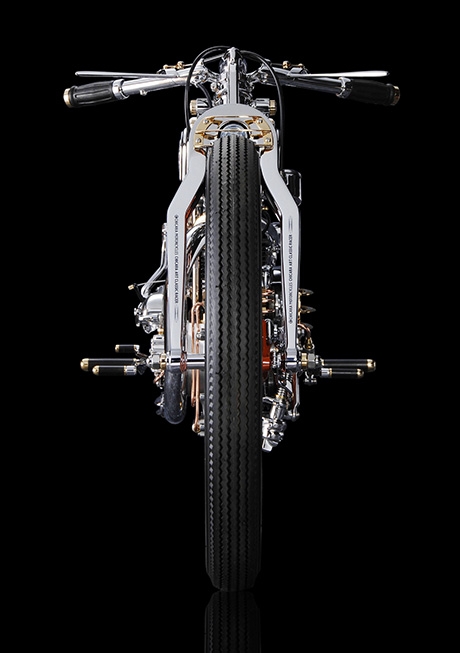 Meguro was the pionneer company in Japan in the motorbike industry. It merged with Kawazaki in 1963.

After winning the AMD Championship in 2006 with Chicara Art One, Chicara won global recognition in France, Belgium, Germany, and started to become famous for his meticulous work on motorbikes amongst the custom bike culture. 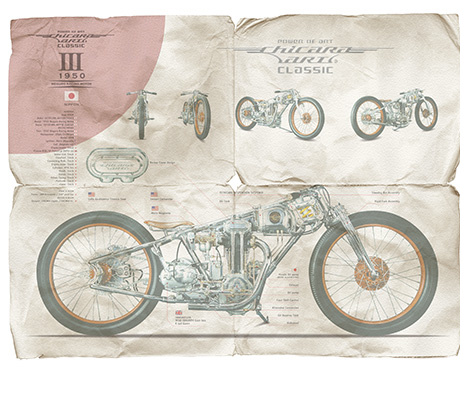 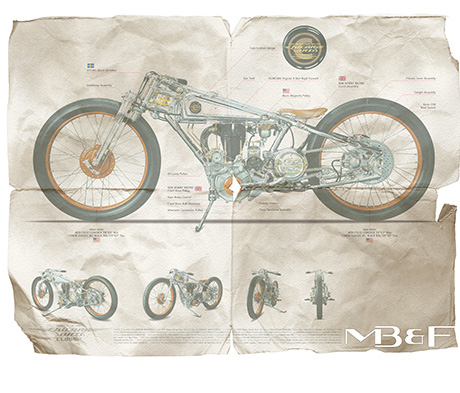 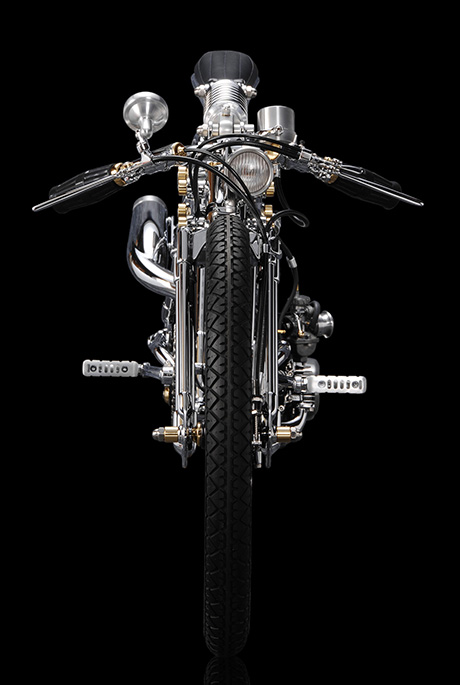 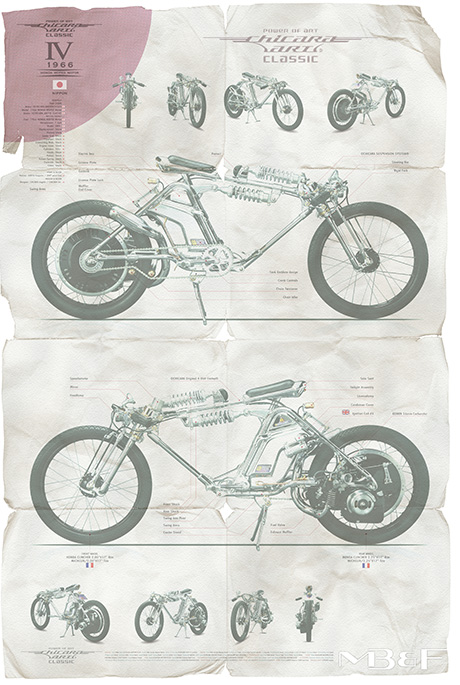 If we want to get specific and pretend we know what we are talking about, Chicara Art V is a unique piece created by hand, in more than 7000 hours, made of chrome, brass and bronze plating. The engine is a Harley-Davidson 1954 KH Motor- Flathead 45°V-Twin - 883 CC. The carburator is a Linkert M-74B.The front and rear wheels are a H-RIM:19"X1.85".

Back to real words, Chicara surprised us, again. Made from scratch, imagined in his head before stepping into the creation, his latest piece, Chicara Art V, as you can see,  drastically shifts in style. Where Chicara Art I, III and IV were much more detail oriented, full of chrome, beautifully hand-finished and hand-polished, Chicara Art V takes a more minimalistic "back to the roots" approach.

Inspired from the bobbers of the 40's and 50's - bikes that are usually handmade by their owners and at their image, where the superflous is left behind- where only the essential parts are kept. The fifth edition of Chicara unique series, is raw, pure and beautiful. 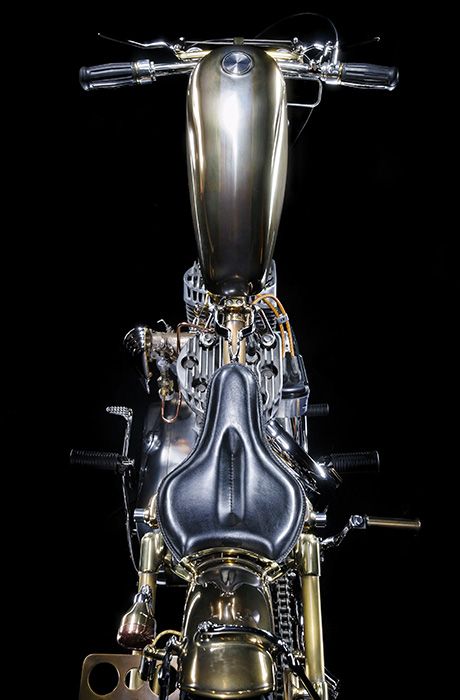 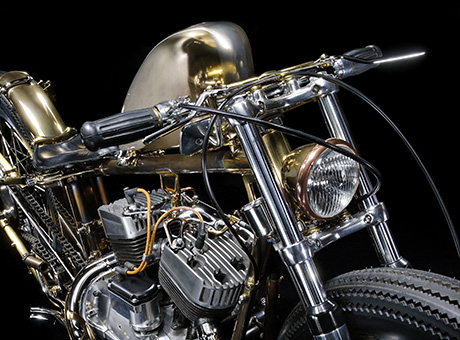 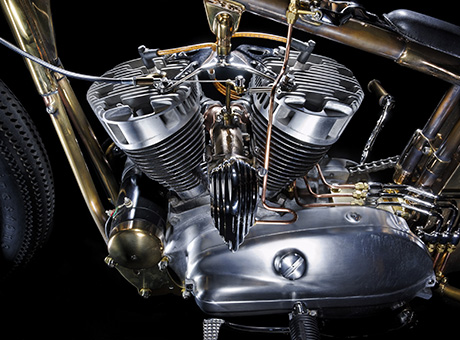