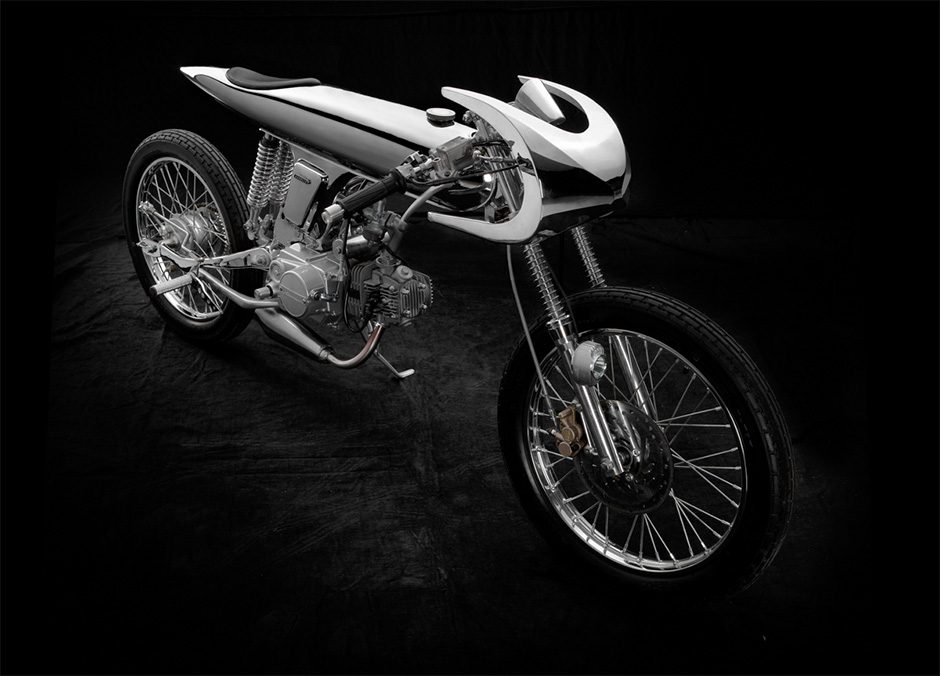 “Riding is a form of meditation for me. I’m at peace when I’m on a motorcycle. My focus is directed toward the road and nothing else. I can’t think of anything else I do that requires my complete attention on the present.” – Daryl Villanueva, “The Bandit Chief” at Bandit9.

An evolution of the highly sought-after limited edition EVE, the EVE MK II once again merges art with machine. This custom creation is designed and handcrafted by Bandit9, a Saigon-based workshop known for breaking the mould and building bespoke bikes with a futuristic design.

Bandit9 takes the joy of riding a motorcycle to a level beyond imagination. Starting life as a 1967 Honda Supersport, the process begins when the bike is stripped – after which it obtains a complete facelift. The modernized and audacious EVE MK II now boasts bold, clean lines and shiny chrome finishes.

“While everyone tends to go old-school on their custom designs with a few tweaks to make it look current, we tend to ignore the past and just make leaps forward,” says Daryl Villanueva.

The custom transformation, which is both mechanical and visual, takes place in Bandit9’s garage at the skilled hands of a talented team of experts with keen eyes for design and an obsession for bikes.

A standout design feature of the EVE MK II is its handcrafted unibody tank in a sleek bullet shape built from a single piece of hand-polished steel. While visually appealing, the form also combines the tank, seat, and the rear cowl into one – not an easy feat. One wrong move and the metal must be scrapped and the process restarted from the beginning. Adding to the production level of difficulty is the fabrication of the so-called X Cowl. Although this is a common shape in origami, executing it in steel takes skilled hands and copious amounts of patience.

The EVE MK II continues to take shape with handcrafted details. A cowhide leather seat is worked into the elongated unibody tank while a custom exhaust, exposed suspension, and an electric starter complete the technical details of the bike’s innovative design.

The custom collection with its elements of individual, handcrafted artistry is limited to 9 pieces only. 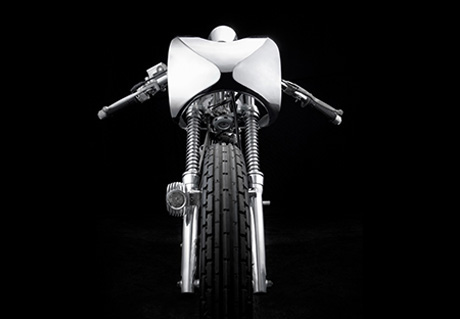 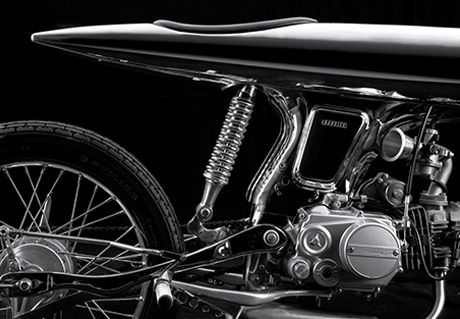 Inspired by the Jet Age, a period of 1940s and 1950s aviation history during which innovations like the jet engine brought about social change, Bandit9 looks to propel design forward and push motorcycle art to new levels. In an effort to continue the spirit of those optimistic times, the EVE MK II drives the art form forward with its futuristic, streamlined designs.

When it comes to designing, the team starts with an original outline for constructing a prototype and devising solutions for the details. A lack of available parts usually forces the crew to create and customize pieces from scratch to fulfil the projected design of the bike. Once the prototype is successfully completed, a process that can take approximately six months, it takes four to six weeks to produce a single bike.

Bandit9’s high standards are apparent in the bikes, and this philosophy of quality continues through each step of the manufacturing process – all the way down to the photography. Each photo shoot is designed and lit to exacting standards; the outcome produces a contact sheet of slick images representing Bandit9’s motorcycle art as its makers intended.

“We want our bikes to embody this optimistic future and to show others that we don’t have to live in this cookie-cutter world where cars all look the same.” 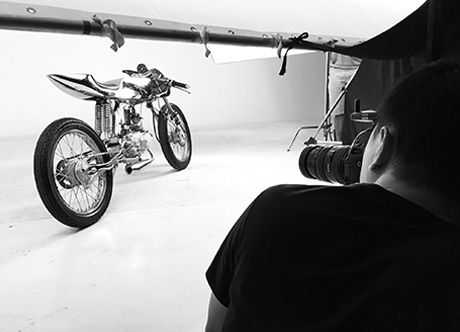 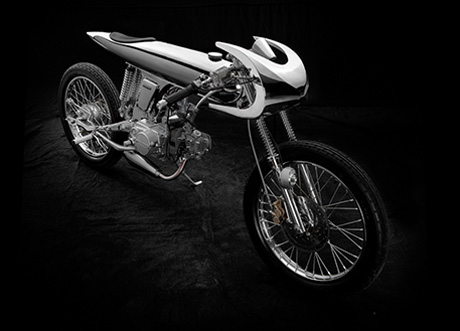 The powerhouse behind Bandit9 is the energetic and inquisitive Daryl Villanueva, “The Bandit Chief.” A citizen of the world, Villanueva was born in the Philippines and grew up living in places as diverse as Hong Kong, Australia, and Malaysia.

After studying graphic design in Los Angeles, his career took him to Dubai, Vietnam, and Beijing as he steadily climbed the corporate ladder and to become a creative director in the advertising industry. These priceless, impactful experiences are infused into his being today.

“I spent a lot of my days collaborating with the best photographers, film directors, architects, car designers, fashion designers, and storytellers – incredible people with immense knowledge and insight in their given field. I knew I was already in an advantageous position to learn from all these people so I soaked it all up so that when I was ready to make my move, I had a lot of different skills in my arsenal,” says Villanueva.

In 2011, Bandit9 was established in Beijing when Villanueva broke out of the advertising world and dove into his passion for motorcycles, a strategic decision involving personal risk that changed his life forever. Now based in Saigon, Bandit9 is a thriving business looking into a bright future.

Today the tight-knit crew at Bandit9 is armed with diverse talents ranging from engineering and design to photography, each enhancing Bandit9’s unique edge in the world of custom bikes.

The name Bandit9 is a nod to outlaws as they rebel against the “normal” and push to create imaginative bikes that are simultaneously mechanical pieces of art. Each bike developed is kept to a limited production of nine – hence the ‘9’ in the name – which allows Bandit9 to produce rare objects while also forcing a stream of continuous design innovation in motorbikes.

In just a short five years, Bandit9 has reached a well-deserved degree of acclaimed success. The M.A.D.Gallery is honoured to exhibit its imaginative motorbikes. “Being part of the MB&F M.A.D.Gallery was always the dream. This isn’t an exaggeration. It actually was a goal that I had set myself when I started Bandit9,” Villanueva admits. “I wanted to create something that could stand next to the finest machines out there. And I always said that if the M.A.D.Gallery ever called me, I would know that I am onto something good.”

“I actually blame bureaucracy and stringent road rules for killing imagination and possibility. That is why I named the company after outlaws. Because we’re not playing by those rules.” 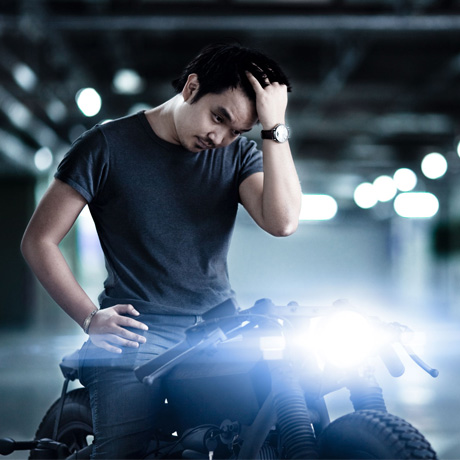