Inspired by the writings of Franz Kafka and the work of artists H.R. Giger and Pierre Matter, Gaby Wormann is an artist who, in her own words, “deals with the themes of individual ethics and humanity's uninhibited intervention in complex biological systems”.

Wormann’s mind-boggling creations, which she calls “MeCre” (short for “Mechanical Creatures”) demonstrate a rare dexterity and represent her futuristic vision of the evolution of insects: New, hybrid lifeforms – organisms fused with mechanics – that are more resistant, more efficient and more technically optimised.

The German artist takes tiny components from the world of watchmaking and mechanical engineering – gears, plates, balance springs and filaments, for example – and incorporates them into the bodies of prepared insects – as beautiful bespoke mechanical exoskeletons.

Born in Germany in 1966, artist and citizen of the world Gaby Wormann divides her time between Switzerland, Germany and Portugal. Her initial works from the MeCre series were first commissioned for an exclusive circle of collectors before being presented to a wider public audience on international exhibitions in 2013.

The MB&F M.A.D.Gallery is proud to showcase sixteen evolutionary insects from the series “MeCre” by German mechanical artist Gaby Wormann, at her first exhibition in the Middle East.

After intense research of insect physiques and biomechanics studies, Wormann will be showcasing her biggest creatures yet, resulting in a series of bionic insects that appear eerily real: if the sight of a Giant Spider isn’t arresting enough for you, then Wormann’s Tarantula – Theraphosa Blondi secundus with mechanized body and mechanically enhanced legs, surely takes this arachnid to a whole new level of exoticism. 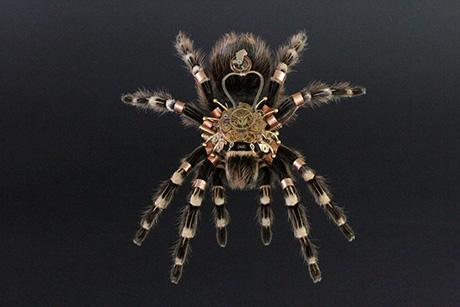 “I discovered Gaby’s work on the internet a few years back and was immediately mesmerized. The incredible mastery of her “Mechanical Grafting” technique is unparalleled worldwide, and the results are breathtaking. Her “Mechanical Creatures” leaves one overwhelmed in fascination and I am thrilled to finally be able to showcase her work in Dubai, after several successful exhibitions in Geneva and Taipei.”

“Insects inspire me, they are a marvel creation of nature and very fragile beings. To modify their bodies in a technical way and to give them a new futuristic identity is an artistic challenge – a photo, illustration or digital rendering will never adequately transform my vision as people need to experience it in real life to see the beauty and intricacies of these mechanical creatures. I am very proud to get this amazing opportunity to exhibit my best and most elaborate creations at the MB&F M.A.D.Gallery in Dubai,” 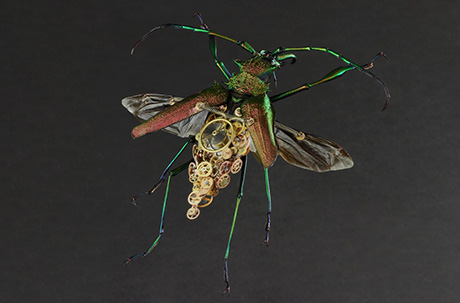 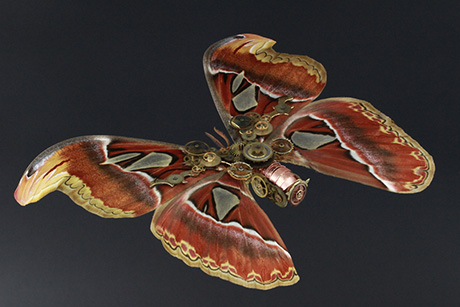 For the first time in Dubai, Gaby Wormann showcases 16 unique art pieces, some in sizes that have never been seen before. The exhibition will run from 12th of December 2018 to 30th of March 2019 in M.A.D.Gallery, Dubai Mall. 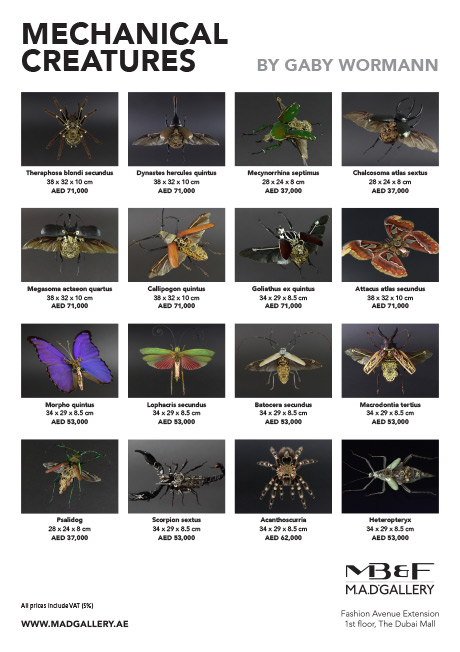