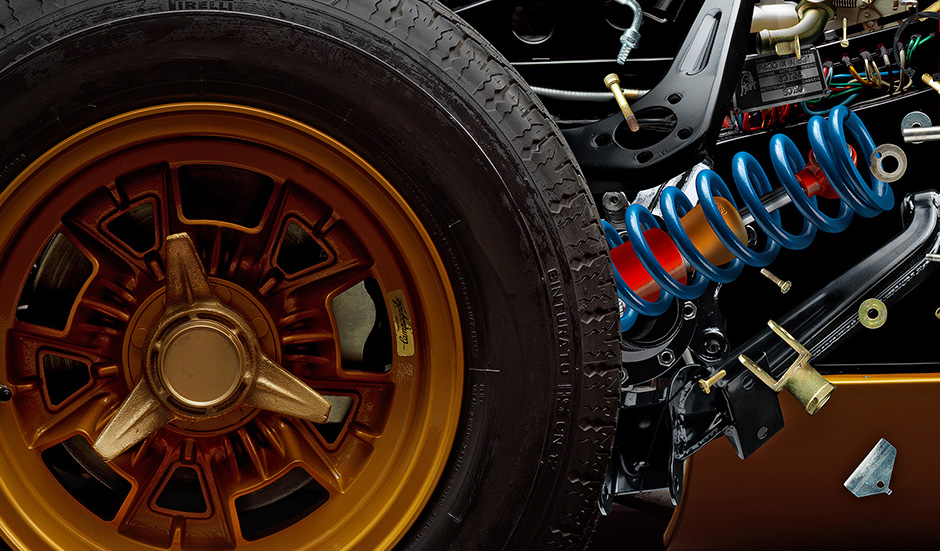 The M.A.D.Gallery is pleased to present “Disintegrating”, a series of large-format prints of exploding cars by renowned Swiss photographer Fabian Oefner.

Living and working in New-York, Fabian has carved out his reputation by fusing the fields of art and science, creating images appealing to heart and mind. He is constantly on the lookout for capturing life moments that are invisible to the human eye: phenomena like sound waves, centripetal forces, iridescence, fire and even magnetic ferrofluids, among others.

The artworks on display at the M.A.D.Gallery Geneva are mind-boggling. In terms of creative process and creation, it takes Oefner months and thousands of photos for a single image to come to life.

After the “Disintegrating” series with scale models, a suite of images of high performance cars that seem to have blown apart, the Swiss artist challenged himself with a real car: a 1972 Lamborghini Miura Super Veloce.

“It had always been my dream to create an art piece with a real car. One day, a friend said to me, “I have a Miura and I’m having it restored. Why don’t you take the opportunity to create one of your disintegrating images?” And of course he didn’t have to ask me twice to work on one of my favorite cars, to get to touch every single screw and piece of that legend, and put them into a final composition... that’s a dream come true!” says Fabian Oefner interviewed by the Lamborghini magazine. 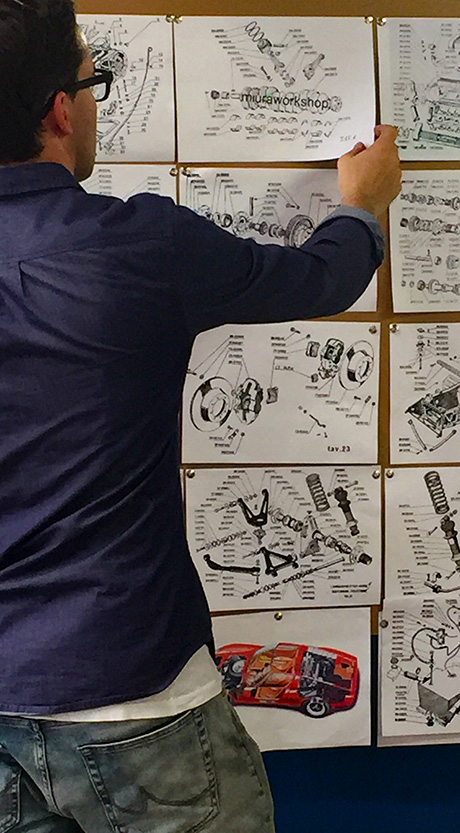 From scale models to a real Miura: that sounds like a big leap.
That’s quite different, yes. I worked on the scale models in my studio, which is very quiet, and creating was almost a soothing process. With the real car it got a lot more complicated: I was in the workshop where you’d have constant noise. Beside me, I had people working – and that was the most beautiful experience of this whole endeavor! – whom I was just asking, “Can I please have a little corner?” Also, keep in mind I did this in July, so it was 44°C in the workshop, I was sweating, and it smelled like gasoline in the air. It’s way more tangible when you do it with the real thing. Now, when I look at the photograph, all the smells and the ambiance of the workshop come back. 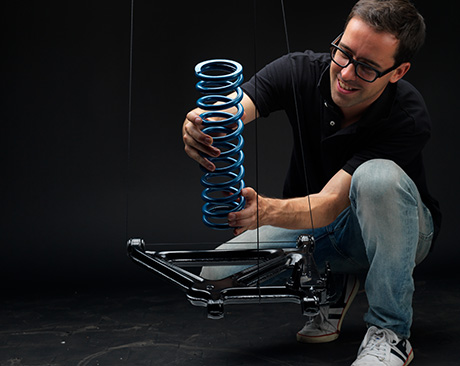 “It took two years and over 2500 photographs to realize this work, from the first time the idea came to me to the final printed image. I depended on the restoration times of the workshop and the challenge was to always keep in mind the vision that I had at the beginning.” 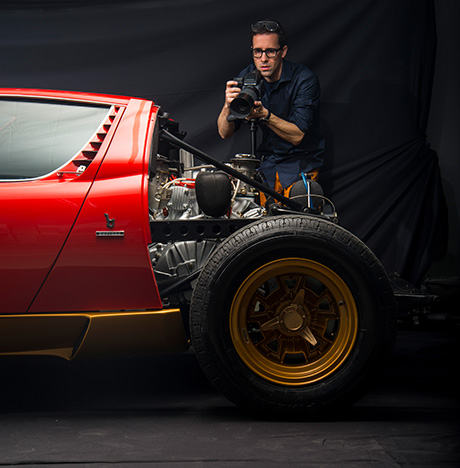 You spent a lot of time with this Miura. How do you feel about it?
When I started working with this car, I was seeing it “just” as the icon we all know, a Lamborghini Miura. But as the days went by, it became more and more special, and at the end of the process I knew every single detail of it. To me, it’s not just a Miura anymore, it’s become a bit like a person. Now it rolls on the road, finished and fully restored, and every time I see it I’m like, “Oh, I know you!”

“Disintegrating X” is available in 2 sizes:

The five images of the “Disintegrating II” series are exploded views of iconic cars that Oefner has painstakingly created by deconstructing scale-models, photographing each component, piece by piece in a very specific position, to create the illusion of an exploding automobile.

This stunning photo series involves fooling the observer into seeing the images as computer-generated renderings rather than the real photographs that they are.

Oefner says: “I have always been fascinated by the clean, crisp looks of 3D renderings. So I tried to use that certain type of aesthetic and combine it with the strength of real photography.”

Maximilian Büsser, M.A.D.Gallery Founder and Curator said: “Fabian Oefner’s works are perfect examples of how mechanical art can be powerfully beautiful. Seeing objects we are so familiar with breaking down into hundreds of pieces, challenges the viewer’s perception of these items. ‘Disintegrating II’ truly encapsulates M.A.D.Gallery’s concept of celebrating the art of mechanics.” 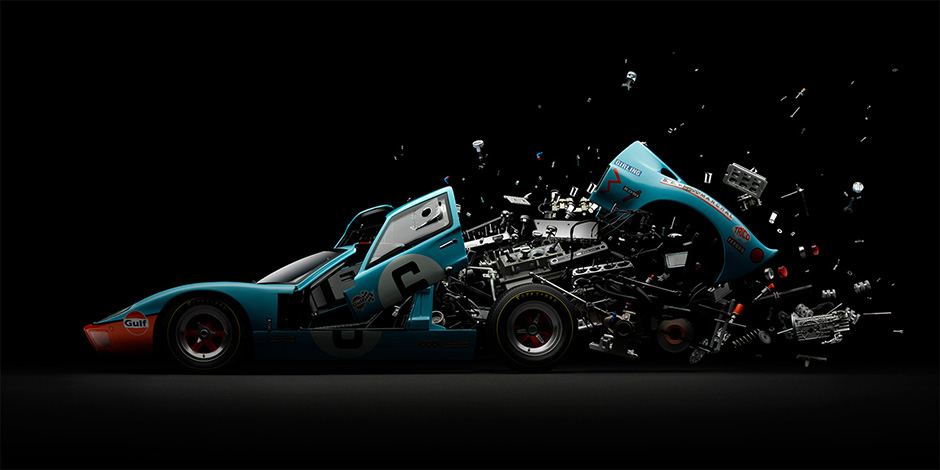 Fabian Oefner explains that photography usually captures moments in time; but his “Disintegrating II” series is all about inventing a moment in time.

Fabian first sketched on paper where the individual pieces would go, before taking apart the model cars piece by piece, from the body shell right down to the minuscule screws. Each car contained over a thousand components.

“Freezing a moment in time is stupefying.”

Then, according to his initial sketch, he placed each piece individually with the aid of fine needles and pieces of string. After meticulously working out the angle of each shot and establishing the right lighting, he photographed the component, and took thousands of photographs to create each “Disintegrating II” image. 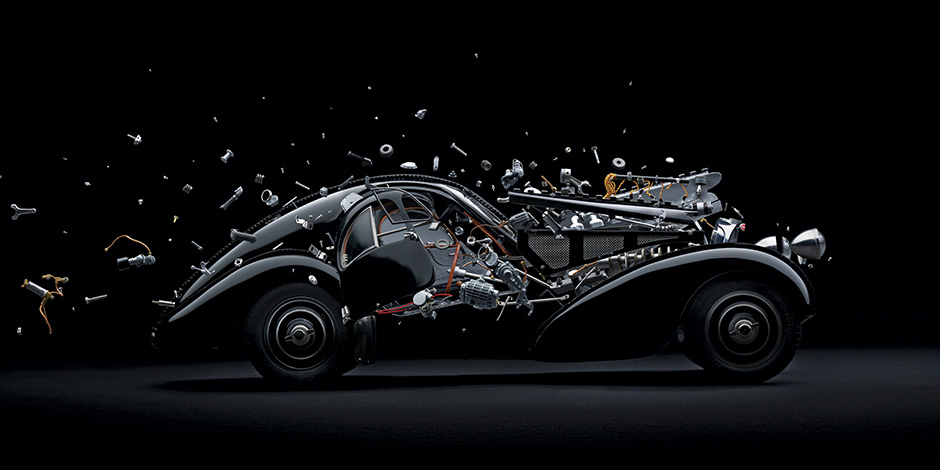 “These are possibly the ‘slowest high-speed’ images ever captured”

Each image is available in 2 sizes: 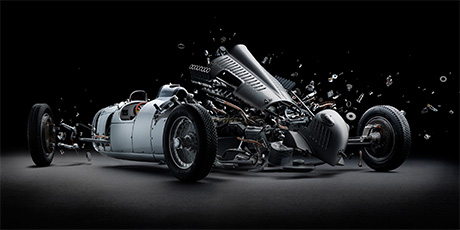 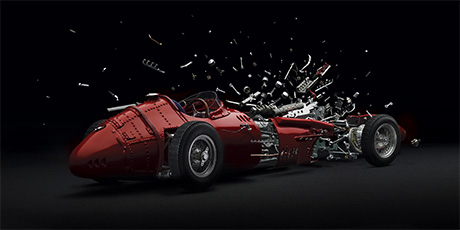 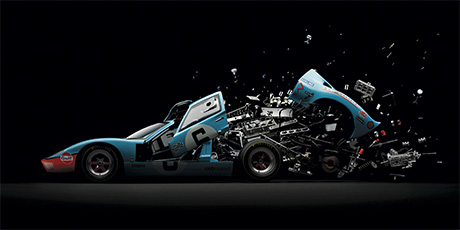 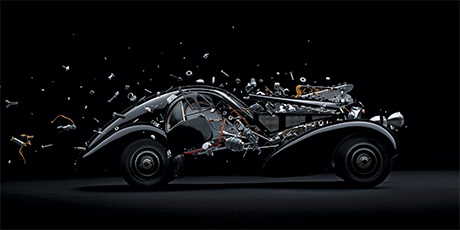 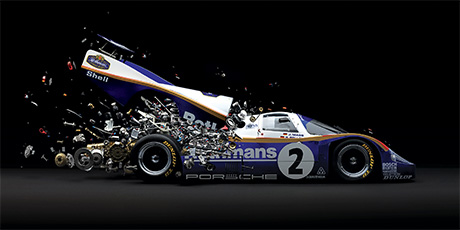 Fabian Oefner was born in Switzerland in 1984. Coming from a family with an artistic background, he attended art school and gained a degree in product design.

Inspired by science, Oefner's approach to art is highly methodical and at the same time playful for unexpected moments to happen. He creates carefully orchestrated works that are planned down to the last detail, as well as pieces that use a loose framework for art to happen.

“I create hyperrealistic objects and photographs, that challenge our idea of space, time and reality,” says the artist.

“Time and Space, which create the state we call reality, are evolving ideas that change progressively with our level of knowledge. They are only concepts helping us to orient ourselves in the world.

At the current level, we believe that time is relative, that objects can be in multiple places at once and that space is an evolving, ever-changing state, defined by mass. We find it very easy to define if something is real or not, yet we struggle to explain why something is real. That’s what I am ultimately exploring with my art. I create fictional moments and spaces, that look and feel absolutely real, yet are fictional. In my art, I dissect the different components of reality to give us a better understanding of how we define reality,” he adds.

Fabian demonstrated his ideas and artwork during a TED Talk, as part of the non-profit’s initiative devoted to ideas worth spreading. His reputation has been growing steadily for the past seven years.