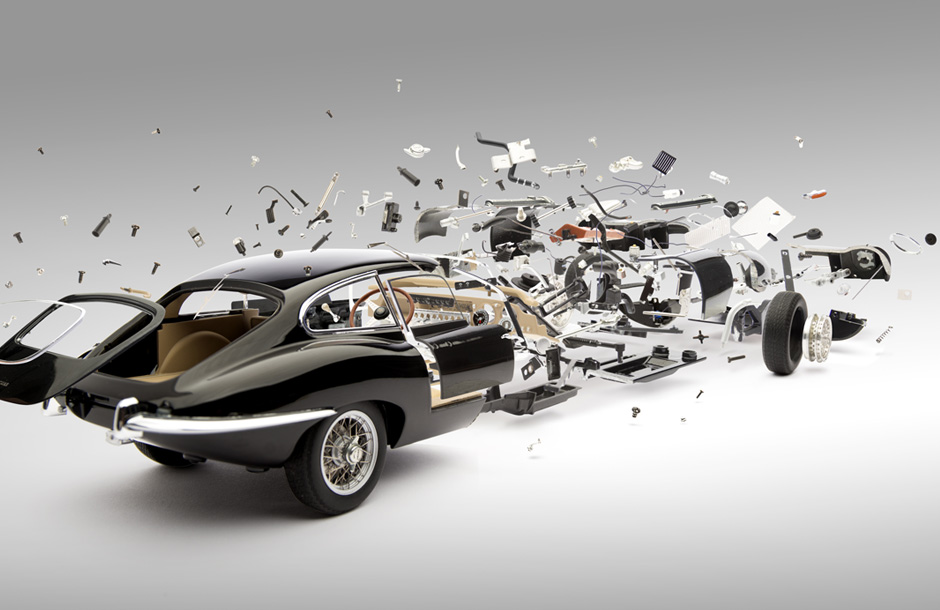 Swiss artist Fabian Oefner has carved out his reputation by fusing the fields of art and science, creating images appealing to heart and mind. He first intended to become a car designer, but in the end, photography made a bigger impression on him.

In 2008, at 24 years-old, he got a degree in product design at FHNW in Switzerland before becoming a product photographer at Leica Geosystems.

Since 2012, Oefner runs his own photo studio in Aarau (40 minutes away from Zurich) where he undertakes projects from around the world. He is constantly on the lookout for capturing life moments that are invisible to the human eye: phenomena like sound waves, centripetal forces, iridescence, fire and even magnetic ferrofluids, among others.

When did it all start? What was the trigger for your success?

When I was 14, I saw the image of Harold Edgerton with the bullet piercing an apple that fascinated me. It was taken with a camera equipment worth half a million dollars! (Edgerton invented the high speed flash at M.I.T.) Then I got my first camera, I was 15, and started investigating on how could I get such an impactful and visual effect on a low, barely existing budge

What is your motivation in doing what you do?

Finding out about what surrounds us and raise people’s curiosity

You are often called or compared to a scientist / an artist: which one do you prefer the most?

What is the satisfaction you get at the completion of an image?

The best thing I could hear is: “Your images inspire me in looking at things with a different eye.”

Always on the lookout to catch the invisible, Oefner constantly looks for new ways to capture moments that are too fast for the human eye.

The Disintegrating series – representing a staggering amount of work- has been created from hundreds not to say thousands of shots. Each car has been dismantled completely, from the body shell to the smallest screws, then photographed piece by piece in a specific position to obtain the illusion of an exploding car. 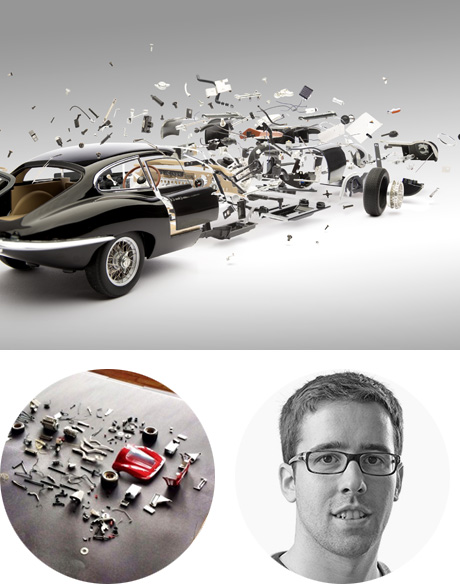 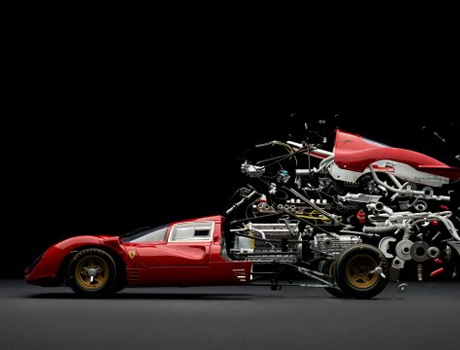 Disintegrating is about inventing a moment in time.

We hope to have the pleasure of welcoming you to the gallery to share these detonating creations with you! 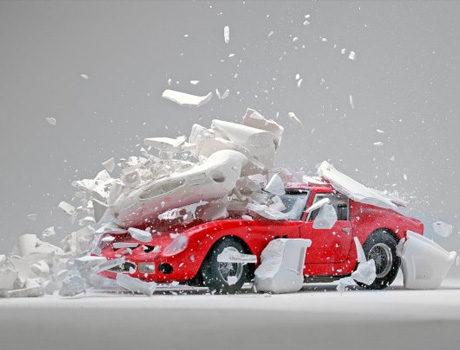 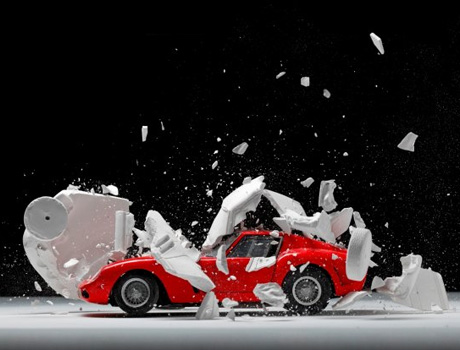 With Hatch, Fabian Oefner presents his interpretation of how cars might be ‘born’. The first two images show a Ferrari 250 GTO (1962) – again a detailed scale model – breaking out of its shell. The third image shows one of the empty shells left behind among several others yet to hatch.

For the Hatch series, Fabian started by making a latex mould from the model car, which was then filled with a thin layer of gypsum to create the shell.

Several dozens of these shells were made in order to complete the next step: smashing the shell onto the car to create the illusion of the vehicle breaking out. This step had to be repeated a great many times until the desired results were achieved.

To capture the very moment where the shell hit the model, Fabian connected a microphone to his camera, a Hasselblad H4D, and flashes, so that every time the shell hit the surface of the car, the impulse was picked up by the microphone which then triggered the flashes and the camera shutter.

Representing a car as a living, breathing organism that has been gestated is a neat twist on car conception; it could be said Hatch is to the automotive world what a stork is to delivering babies.

Someone who doesn’t know and doesn’t care about how these images have been made assume it is by computer software exclusively. The way it really works is much more complex, flabbergasting and interesting!

For the Disintegrating series, Fabian first sketches on paper where the individual pieces would go, before taking apart the model cars piece by piece, from the body shell right down to the minuscule screws. Each car contains hundreds of components.

Then, according to his initial sketch, he places each piece individually with the aid of fine needles and pieces of string. After meticulously working out the angle of each shot and establishing the right lighting, he photographed the component, and took thousands of photographs to create eachimage of the series. 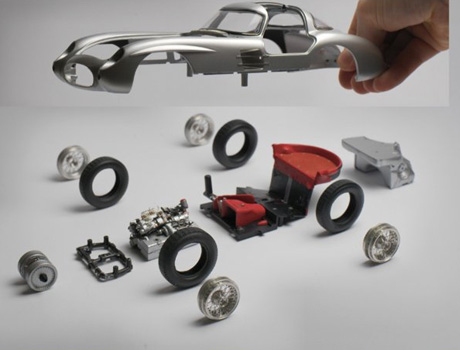 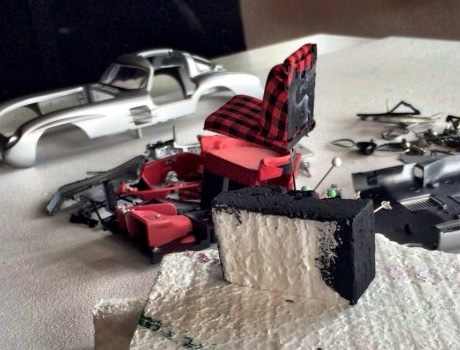 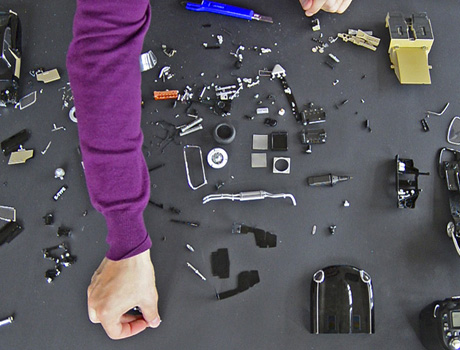 it takes two months to create an image that looks as if it was captured in a fraction of a second. 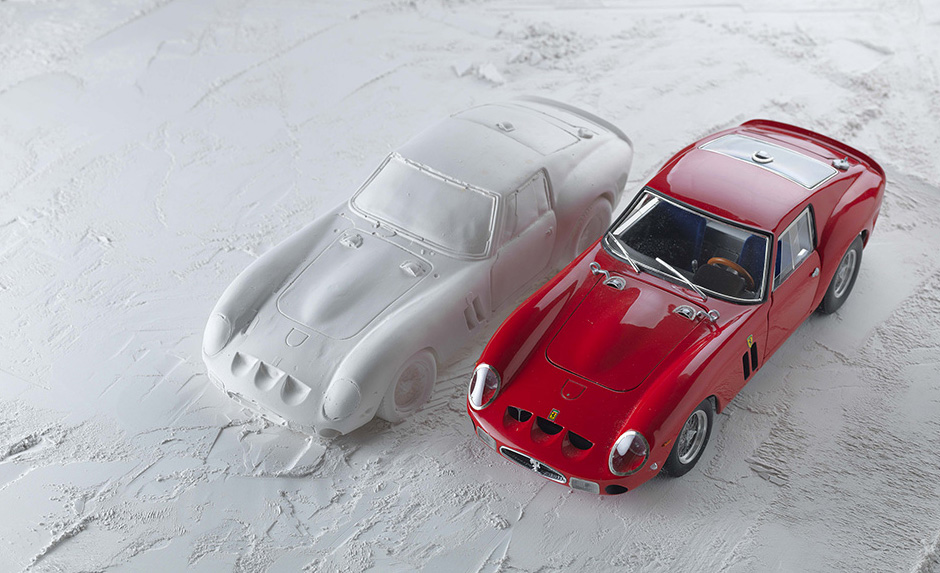