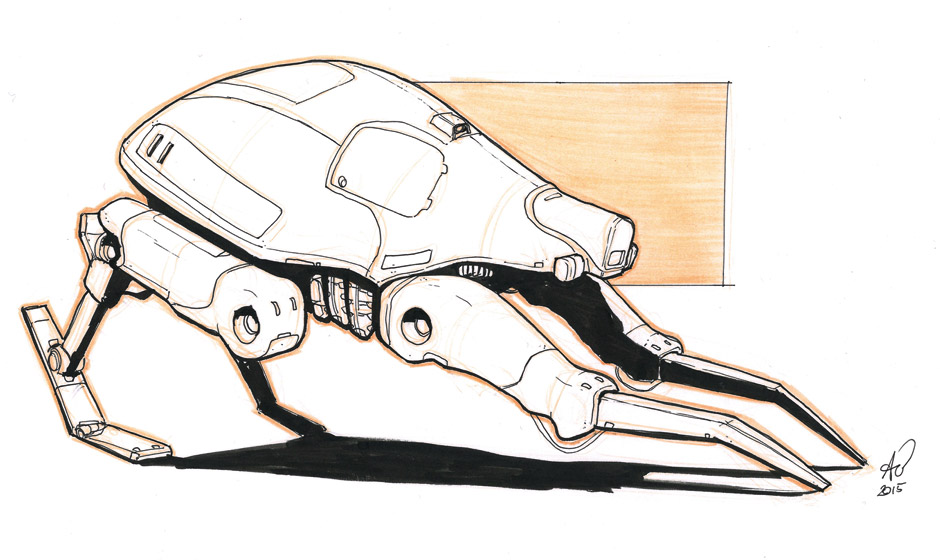 The M.A.D.Gallery is pleased to host “Walking Machines”, an exhibition of robot sketches by conceptual artist Alan Blackwell.

Alan Blackwell is a freelance Australian concept artist and illustrator.

Born in Adelaide, South Australia in 1981, his love of Star Wars, Transformers, and kit building provided a foundation for his love of illustration and drawing – whether it be on clean sheets of paper or textbooks.

The artist never finished high school but honed his skills in a series of chance opportunities, the first being a university course in industrial design and the next being the encounter of a lovely woman – who, incidentally, became his wife and biggest supporter.

Blackwell’s journey to make art for a living eventually took him across the world to Canada, where he landed a job as a concept artist for DeNa Studios.

The humble artist is now back in Australia, where he continues to illustrate, pushing the boundaries of what his imagination creates. But even with this drive to draw, he still finds time to play music and ice hockey.

Alan Blackwell's designs are sparked by his highly creative imagination, where inspiration derives from the likes of Transformers and Star Wars.

A conceptual artist, Blackwell creates awesome sci-fi machines brought to "life" using just a pen (or pencil) and paper – though that wild imagination is a key ingredient in this recipe.

As a child, Blackwell loved science fiction – the lure of Star Destroyers and Megatrons was irresistible – and he exhibited a knack for sketching. However, his resources were few and far between, and in a pre-internet age his only learning tools were library books on how to draw quaint houses. Which isn't that helpful if you want to design something further afield . . . like spaceships!

“I decided I was going to focus on becoming the artist I wanted to be,” the Australian explains. “I dedicated myself to drawing and sketching as much as I could, and I was terrible. But there was nothing for me to sink my teeth into for learning how to improve my craft.”

Blackwell's appetite for drawing led him to sketch on whatever he could find, which was mostly notebooks and school books that were transformed into phantasmagorical training grounds for his unique style of graffiti.

“Whenever I would get a fresh textbook for another class, I would draw a cool car on the front page,” says Blackwell. “But I think from all that early experience I never really considered the option or possibility of taking a career in art seriously. No one was there to encourage and push me forward.”

Thanks to the internet, Blackwell stumbled into concept art by chance. He happened upon a website where artists regularly published their own “concepts,” including robots, machinery, and even industrial items. This provided him with the motivation to draw and share his artwork without the hassle of having to manufacture his penned creations. Blackwell had finally found his niche. 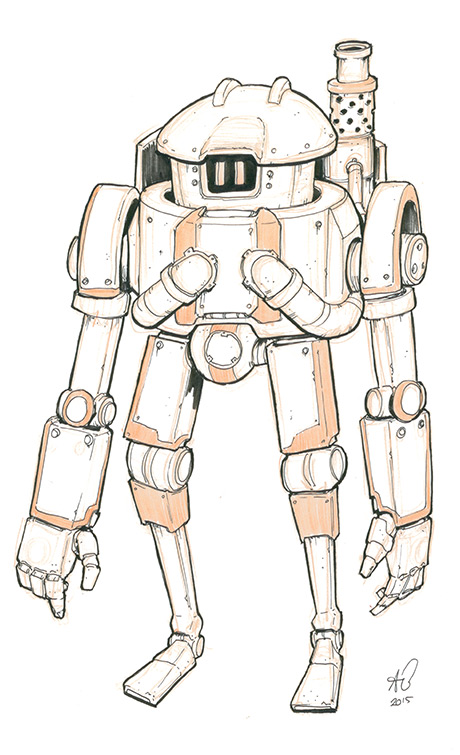 “I just really love drawing quirky robots,” says the artist. “They are definitely my comfort zone when it comes to drawing. I love other genres a lot but I always seem to come back to robots.”

Blackwell’s robots have a laid-back feel, not as austere and overbearing as many of their cinematic contemporaries. They seem friendly, as if you could take one out and have a really good time. And, most importantly, they wouldn’t shoot your head off for not picking up the tab.

Just like the robots in his drawings, the South Australian also exudes a relaxed attitude.

“Most of the time I have zero clue as to what I am going to draw so I just like to see where my pen goes,” says Blackwell.

Having “zero clue” gives the Aussie more freedom in his work. Blackwell’s creative process starts with “messy drawings” to get an idea down on paper. Then, if one of these rough sketches really strikes him, after a little more fine-tuning, he will switch from pencil to ink for a final rendering.

“My forms tend to be simpler; big shapes with some smaller details thrown in to spice it up a little bit. I like to leave the initial sketch in behind the inks as I feel like it gives it life,” explains Blackwell. 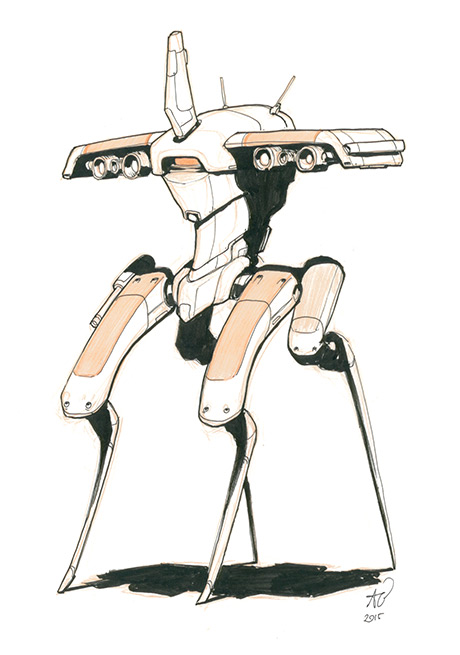 The cast of robots is amusing thanks to Blackwell’s artistry and attention to detail.

The Robocorns and Squid Cruisers of his imagination look into a future where robots are handy friends to have around rather than menacing droids. Their shapes are a stew of the earthly, the beastly, and items you find around the house mixed with a futuristic vision.

Be on the lookout for his favorite sketch, “FrankBot,” a technically intricate exploded diagram and one of the most challenging illustrations of the exhibition to execute.

Blackwell hopes his art propels people into a futuristic world where imagination and fantasy creep back into the adult mind, allowing grown-ups to pretend, just for a moment, that robots and spaceships exist alongside them. That's a message that we at the M.A.D.Gallery are happy to spread. 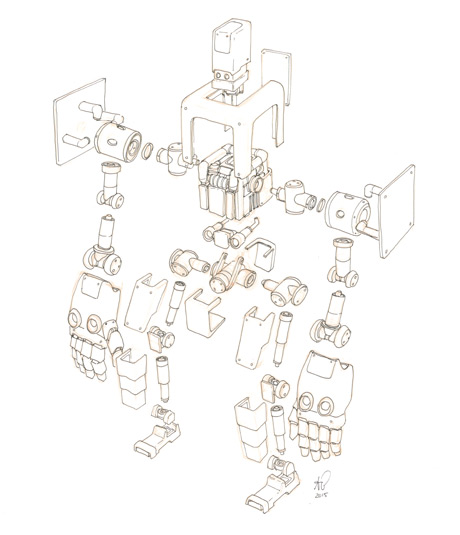 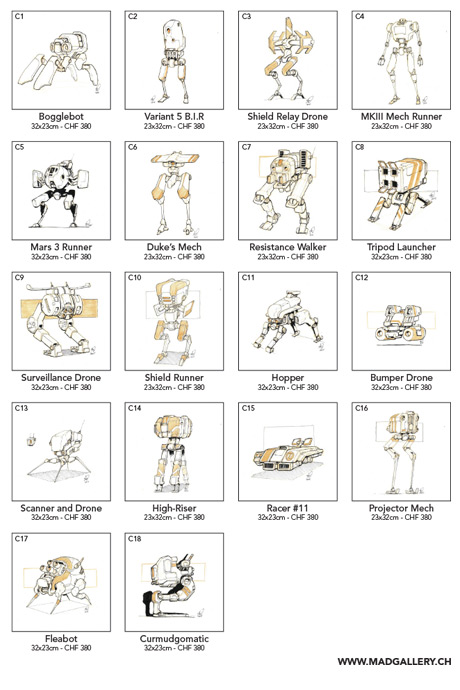