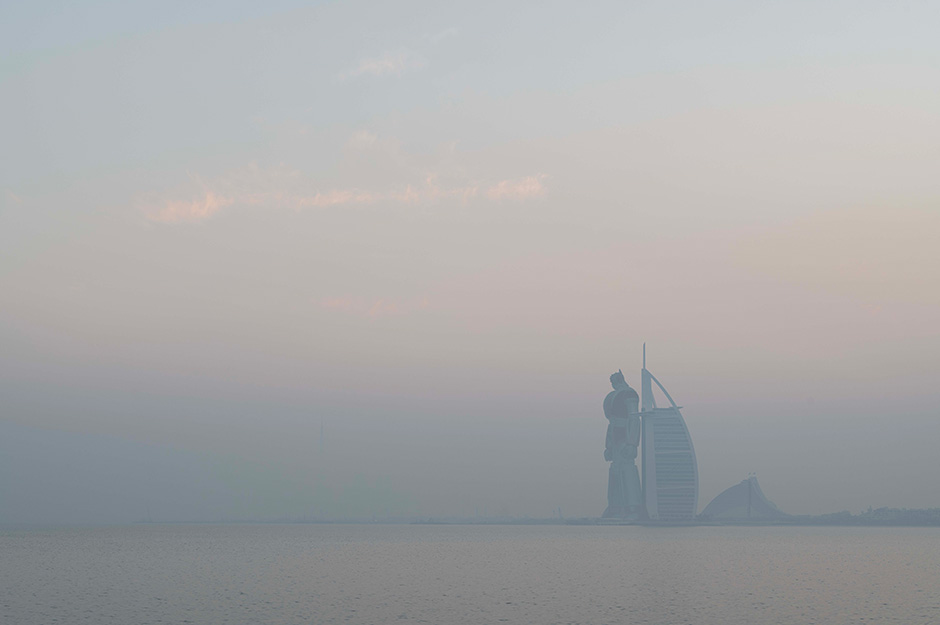 Marc Ninghetto was born in Geneva in 1972. After graduating from the Vevey School of Photography in 1995, he left for Paris to become first assistant to Dominique Issermann after the acclaimed French photographer had shown interest in Ninghetto’s work. During his year in the French capital, Ninghetto flourished under Issermann’s tutelage and gained the skill and confidence to develop his own style and technique and set up as an independent.

Parallel to his work in the high-end fashion and jewellery industry, Ninghetto has also channelled his talent into personal artwork that has seen him put on over 15 exhibitions in as many years. He has increasingly devoted his energies into these personal creations that focus on human subjects, invariably females. Thanks to the dreamlike veil that envelops this work, his sensitive eye for detail and his original style and technique christened ‘digital sampling’, Ninghetto has become one of the biggest names in Swiss art photography.

Launched in February 2017, Wandering Shutterbugs is the first to offer customised tours of exciting international destinations that feature amongst the most popular and desirable locations for landscape and nature photography. So far the tours have spanned Georgia, Tuscany, Dolomite and Iceland, with Lapland (Finland), Lofoten (Norway) and Provence (France) planned for 2020.

With a deep passion for photography, Rafi has devoted the last 6 years to perfecting his craft and is the first photographer to be selected by internationally renowned Swiss art photographer and master of ‘digital sampling, Marc Ninghetto, for a collaboration.

THE SOLITUDE OF A MACHINE III

The MB&F M.A.D.Gallery is proud to debut the 3rd edition of ‘The Solitude of a Machine’ photography series, which pays homage to iconic Japanese manga robot ‘Grendizer’, while being set against the backdrop of the majestic landscapes of the UAE. The series is the first ever collaboration of internationally acclaimed Swiss photographer, Marc Ninghetto, and UAE based landscape photographer, Rafi Kabbas, to create nine awe inspiring large-format prints, that juxtapose the larger than life Grendizer across memorable locations of the UAE, spanning both the urban skyline and the grand beauty of the desert.

Employing a technique called “digital sampling” which he has perfected over the years, Marc implements a meticulous process where he captures images of three-dimensional robot models and then expertly incorporates them within landscape and background photographs, ultimately enabling Grendizer to be a part of our ‘real’ world. Through the skillful use of shadow and light, the robot’s existence can range from dominate to subtle in the imagery, leaving a lasting and realistic impression.

“Grendizer featured very prominently in my childhood and to see him come to life and be portrayed in such a realistic way, against the backdrop of the UAE, is a very special feeling. We are always looking to push boundaries with the pieces that we showcase at the M.A.D.Gallery and I couldn’t be prouder to exhibit this body of work. It is also particularly noteworthy, that this is the first time that Marc Ninghetto has collaborated with another photographer, and we are particularly proud that it should be a resident of the UAE,” said Maximilian Büsser, M.A.D.Gallery founder and curator. 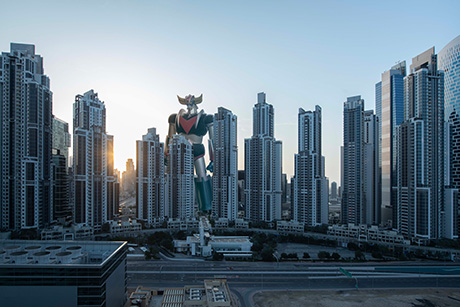 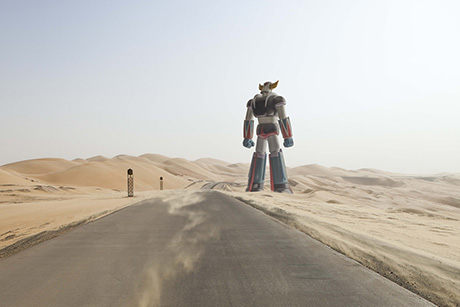 The result is a series of striking photos in which Grendizer is juxtaposed across memorable locations of the UAE, spanning both the urban skyline and the grand beauty of the desert.

‘The Solitude of a Machine III” comprises 9 photographs, each available in 3 different sizes: 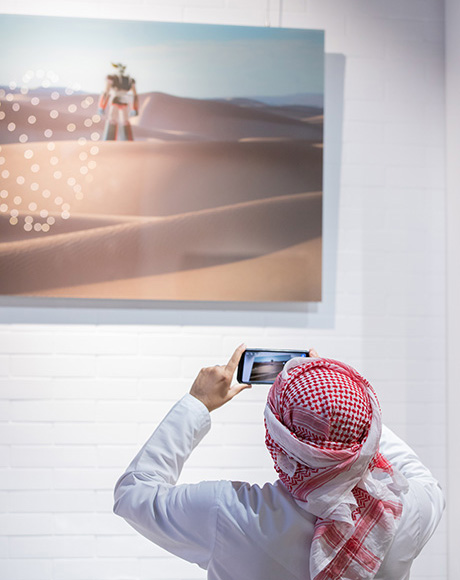 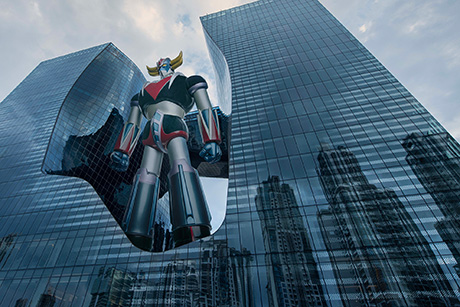 THE SPY WHO CAME FROM VEGA

IT'S ONLY A GOODBYE 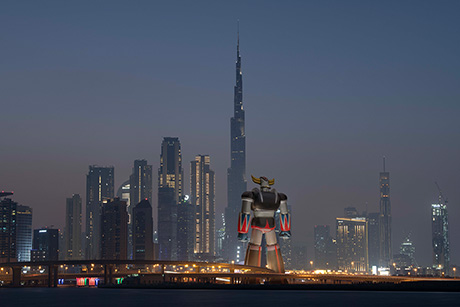 THE INVINCIBLE FROM COSMOS 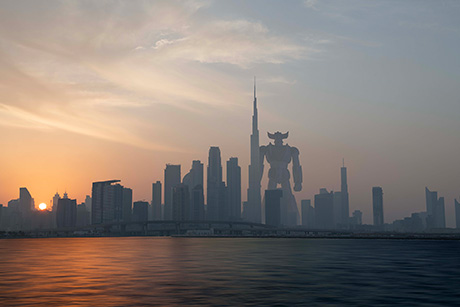 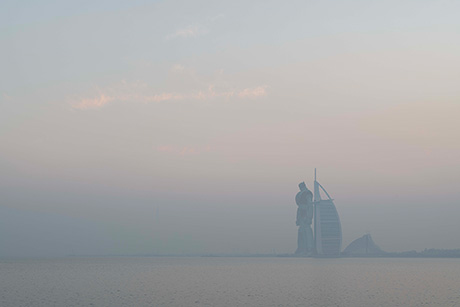 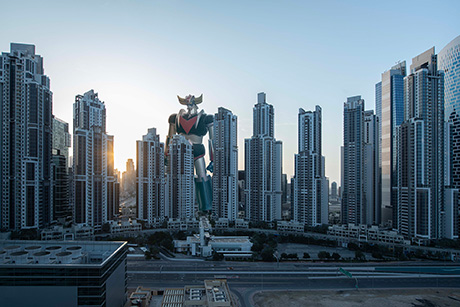 THE AWAKENING OF VOLCANOES 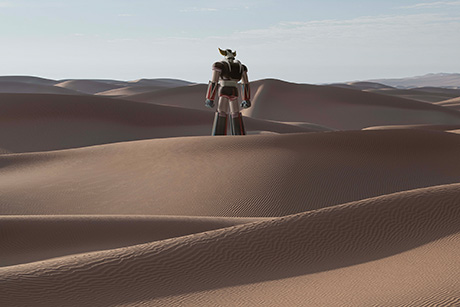 THE RADARS HAVE FALLEN SILENT 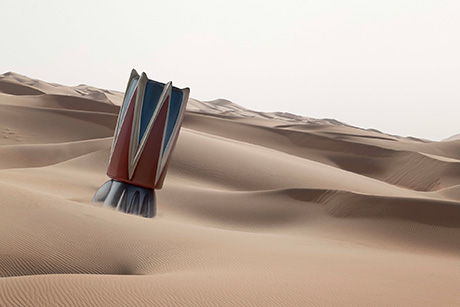 BY IRON AND FIRE 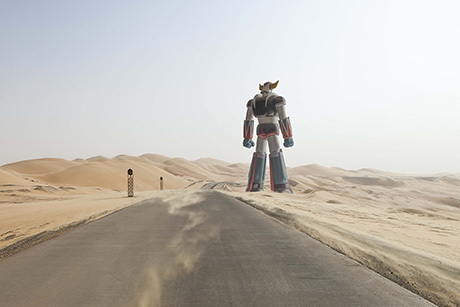 THE EDGE OF THE ABYSS
previous
next
E-SHOP